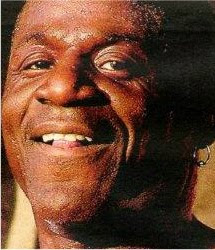 Neville Eugenton Staple was born in Jamaica and he grew up in Coventry rather than South London but he was the perfect choice for this "Lewisham People's Day" event in Mountfield park and he really delivered the goods. The previous act had been a young local guy doing human beatbox stuff. He managed a reasonable cover of "The Message", paid tribute to Snoop Doggy Dog and then got the kids on his side by doing the theme tune to Bob The Builder.
Before Mr Staple took to the stage the DJ played "Train to Skaville" and as more and more people started arriving I had a feeling inside that this was going to go well. The set began with "Man at C & A" from the More Specials album. A few songs later he announced that he wanted to dedicate a number to everyone in the audience and his band performed an absolutely perfect version of Message To You Rudy. It went down a storm. In fact there was a couple of moments when crowd went so wild that Nev looked rather taken aback. The Specials used to be a people's band and so many of those great songs worked brilliantly at this free event. A sincere "Doesn't Make It All Right" was really quite moving. "Do The Dog" (with additional "Woof Woofs") got everyone going and the skanky version of the daft Fun Boy 3 track "Lunatics" was also a treat. 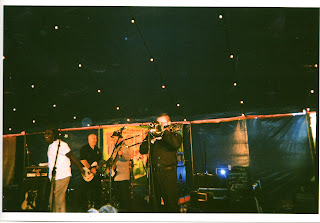 His band (who have been working with him since 2004)compliment him perfectly. There were great guitar and organ solos and the trombone player was particularly good. Their cover of my favourite Bob Marley song Simmer Down was brilliant and his take on "Johnny Too Bad" was pretty good too. 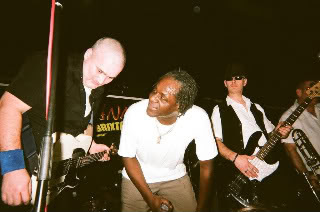 I'd seen Nev and his band perform in Brixton late one night a year or so ago (see photo above)and they were absolutely fine but this show really was special. At one point he told the crowd "I'm getting on a bit" but watching him dance away to "Gangsters" with a great beaming smile on his face it's obvious there's still an awful lot of life left in him. The crowd loved him and like myself were all delighted to see the return of this rude boy.
(Below: Nev and co on the cover of an issue of Smash Hits I bought for 20p in Lewisham's Popular Book Centre many moons ago.) 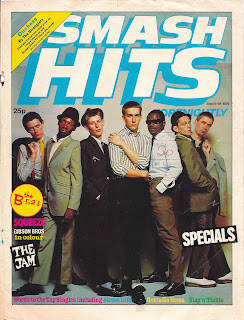 Posted by The Rebel Magazine at 13:13