Q & A with Mark Wigan

Mark Wigan is one of Britain's most influential graphic artists. In the 1980s his work was always in mags like I-D. I used to find flyers he had designed and decorate my bedroom walls with them. Over the last 25 years he's had success as an author, a muralist and an animator and he's even painted on a gigantic toad. To witness examples of his greatness visit here:
http://www.wigansworld.com/ 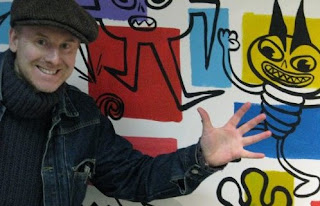 Harry: You were one of my art heroes who were yours?
Mark: "Vladimir Mayakovsky, James Gillray, William Hogarth, Honore Daumier, Tristan Tzara, Jack Kirby, Jim Flora, Lowry, Luis Bunuel, Phizz Hablot Browne, Henry Darger, Edward Bawden, Paul Hogarth, Jules Phiffer, George Grosz, Robert Crumb, Otto Dix, John Heartfield to name a few."
Harry: What do you remember about the club scene in New York? How did Andy Warhol discover your work?
Mark: "I first spent time in NYC in 1986 going to clubs such as Area and Palladium and Save the Robots taking polaroid portraits for i-D Magazine
Warhol saw the Urbanites mural by myself and Yuval Zommer at Limelight London described it as HOT! and recommended we paint limelight on 6th ave NYC which we did.he also introduced us to Keith Haring while in NYC in 86."
Harry: Were you ever into the work of Jenny Holzer, do you see any links between her work and yours?
Mark: "I was familiar with her work, an interesting critical dialogue use of letterforms."
Harry: How long did you work for the NME - were they golden years?
Mark: "Working as a freelance illustrator 1983-7 I illustrated for NME and i-D amongst many other mags, (NME was very popular back then.)"
Harry: Is it acurate to describe you as being "big in Japan"?
Mark: "My work has been popular in Japan in the past e.g.-public art commissions, set designs and title sequences for popular tv shows and my own chain of illustrated merchandise shops in the 1990s and lots of live painting performances and interiors and murals for nightclubs across japan, I have spent a lot of time in Japan working on a wide variety of projects."
Harry: Do you own any artworks by other people, have you ever bought a painting?
Mark: "I have bought paintings by artist friends including a portrait by Mike Silva I also own a John Lennon print."
">
Harry: Do you think Philip Larkin would have enjoyed your toad artwork?
Mark: "It was a colourful toad it may have cheered him up a bit."
Harry: What would you like to do in the future? What are your art ambitions?
Mark: "I'm working on a pHd at the moment and 10 large pen and ink drawings for an exhibition in NYC next year, also continuing to lecture on undergraduate and post graduate programmes in Illustration and Design."
Harry: Tell me about the books you've published - which one is your favourite?
Mark: "I've authored five books on Illustration published by ava publishing (info online) translated into a number of languages and key texts at schools of art and design worldwide." 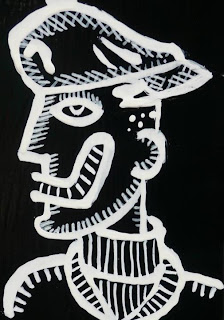 Harry: Do you see your work as always being positive and uplifting? Do you think you have a role to play?
Mark: "As an educator I nurture creativity and try to build up students confidence in their work, my own creative output - there is a sense of humour in the black and white ink drawings which are a form of reportage and social commentary and the colour work -paintings and murals is vibrant and uplifting." 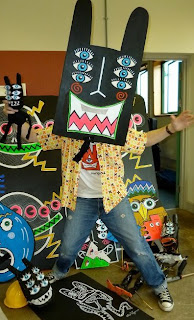 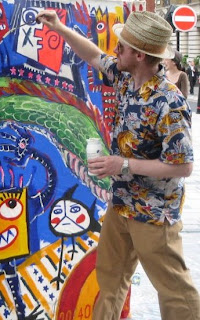 Posted by The Rebel Magazine at 11:38