An A to Z of Simon Munnery

Last week I meet up with the clown prince of comedy in the Z-bar cafe in Stoke Newington. His answers to my questions have been put in alphabetic order... 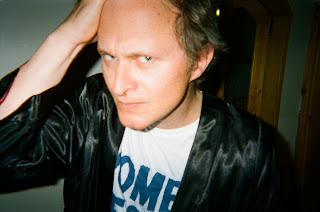 A is for Andy Kaufman
Simon: "It was Mel Brimfield's idea to recreate various forms of performance art. Andy Kaufman wrestling women was part of her project and she asked me to do it which I did. The speech which is there to irritate and wind up women was entirely my own and so I haven't used any of his jokes. I had a stockpile of anti-women material that I was able to deploy." 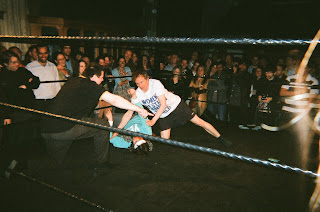 B is for Billy Buckethead
"Billy Buckethead is resting. I haven't performed (with a bucket over my head) for a while. I did a radio show interview in Australia recently and the host said - "my parents went to see your show where you had a bucket on your head and they've haven't been to a comedy night since." So I apologised. I came up with ten minutes of material. The first line was "Good evening, nice to be here... I imagine". In Edinburgh it went down fine but in Birmingham I had the worst heckling I've ever endured. Even afterwards in the bar a man came up to me, blocked my path and said, "You're shit!" I said nothing. He said "Aren't you going to react then?" I decided not to."
C is for Coffee
Simon: "On tour we heard that Billy Connolly famously never drinks coffee apart from when he's about to go on stage. (In which case) he'll have a double expresso and then go off like a rocket. I'd been on tour with Jason Freedman for 2 weeks. We were exhausted, just knackered. We were backstage in a place in Preston and there was a big jar of coffee in front of us. We decided to have the lot and drank it down like soup. It worked. We went off like rockets but the comedown was just awful. It was a sunday night in Preston. Everything was closed we were in rooms that just had a lightbulb, a sink and a bed. We'd read our books and there was just nothing left to say to each other. We just lay on our beds in these seperate rooms looking up at the ceiling wishing we could die. It was awful."
The Rebel: I prefer tea to coffee.
Simon: "Me too." 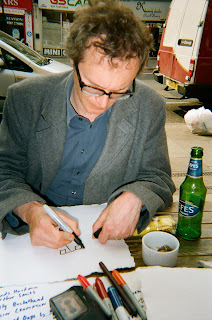 D is for Drawing
The Rebel: Do you like drawing. Could you do a self portrait for me?
Simon: "I'll have a go."
E is for Edinburgh
Simon: "I'm currently working on ideas for my next show at Edinburgh. It's going to be called "Hats Off For The 101ers". I'm sure you know about the R101 airship disaster - in 1930 the biggest airship of it's time crashed on it's maiden flight. Well, I'm going to be doing a one man musical about that. All the songs will be done in the style of Joe Strummers pre Clash band the 101ers."
F is for The Fall
The Rebel: Are The Fall as good now as they once were?
Simon: "They are as good now but not as good as they will be. I think Mark E. Smith is a national treasure. He's brilliant with his phrases. Fragments of Fall lyrics are always popping in my head... Out of England I dream of its green marine."
G is for God & Jesus
The Rebel: When I first saw you perform you were part of a double act called God and Jesus.
Simon: "I played God."
The Rebel: I can remember a lot of your material from that act. I thought it was fantastic. Have many of the lines remained in your head?
Simon: "At school I used to stand on a chair and stab myself repeatidly in the genitials with a compas - even then I was an entertainer. I had my own gang - it was very difficult to join, you had to wet yourself in class. I joined three times."
The Rebel: I think all the God & Jesus material is comedy gold. Is it on You Tube or anything?
Simon:"I have a DVD called Hello and there are a few clips of God & Jesus going down a storm in the extras section. God & Jesus either went down very well or they would die very badly."
H is for Health
The Rebel: How is your health these days?
Simon: "Oh it's ok, he said smoking another fag. no, it's ok - touch wood."
I is for Ideas
The Rebel: Where do your ideas come from?
Simon: "Mysterious sources... things just occur - it's inexplicaple. I have to force myself to write. I guess it's a kind of a trawling process."
J is for Jealousy
Simon: "It's not a very helpful emotion is it? There's no comedian I'm jealous of there's just lots of people like John Hegley and Dan Kitson that I admire a lot. Sometimes I wish I was richer but thats a universal state. In absolute terms it doesn't matter as long as you can keep the wolves from your door."
K is for Keith Allen
Simon: "Keith heckled me when I was performing at Up The Creek once. I responded by putting him down for doing ads in which he played the part of a tooth fairy. I never saw him do stand-up. I heard about him going to Northern working men's clubs dressed just in his pants and trying to get off with blokes in the audience."
The Rebel: Are you a Keith fan?
Simon: "Oh yes. I like all people called Keith."
L is for London Shouting
Simon: I did a pilot for a TV series called London shouting with Alan Parker the urban warrior. I was very ill with a cold and the producers encouraged me to make the show a spoof of The Word. I wasn't very happy with it but it got nominated for a British Comedy Award. I thought being nominated would mean they'd give me a series but they didn't." 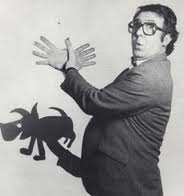 M is for Malcolm Hardee
Simon: "Malcolm helped me and got me lots of gigs. I spent a lot of time at his house. I remember one night in the Tunnel club I went to the toilet and overheard two blokes talking about him. One said, "It's been a good night hasn't it?" and the other guy said, "Yeah, and if Malcolm gets his bollocks out it will be a great night." And it was."
N is for Names.
The Rebel: Do you like your name?
Simon: "Simon is all right. Harry Pye is a great name."
The Rebel: What is your middle name?
Simon: "Douglas."
The Rebel: Douglas Munnery sounds good. It sounds like a name a writer would have.
O is for Roy Orbison
The Rebel: He was known to his fans as The Big O.
Simon: "Yes. There's a village called Ornley and whenever I used to drive there I'd sing "Only in Ornley" to the tune of "Only The Lonely."
P is for Proverbs
The Rebel: You quoted from William Blake in your Attention Scum series. Do you like his Proverbs of Heaven and Hell? Do you have a favourite proverb?
Simon: "The cut worm forgives the plough is a good one. The road of excess leads to the palace of wisdom is a famous one. The thing is that roads lead both ways so it leads away from the palace of wisdom too. There are other ways to get there - the helicopter of inherited wealth for example."
The Rebel: Blake believed that the tygers of wrath were wiser than the horses of instruction. Are you a horse or a tyger?
Simon: "As the years have passed I have become more and more like a horse of instruction... bursts of tyger wrath are quite rare now."
Q is for Queen
Simon: "My next door neighbour and I make little films and I dress up as the queen. I've written a play about Queen Elizabeth the first but it's on the back burner at the moment."
R is for Red
Simon: "I recently had a 28 hour long flight and I watched the Bruce Willis film Red. Red stands for Retired & Extreamly Dangerous."
The Rebel: I saw it being reviewed on Breakfast TV and they said it was a waste of talent.
Simon: "Well it was. And a waste of my time." 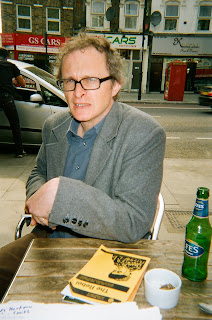 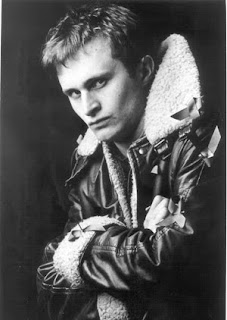 U is for Urban Warrior
Simon: "Alan Parker Urban Warrior was a character I used to do, and shall do again when it's been left fallow long enough."
V is for Vampires
The Rebel: Do you like Vampires?
Simon: "Yes. My teeth are a bit like a vampire's...look."
The Rebel: Oh yeah. Ken Dodd had his comedy buck teeth insured. Will you be insuring your vampire like teeth?
Simon: "No. Others should insure against them. Ruhahaha" 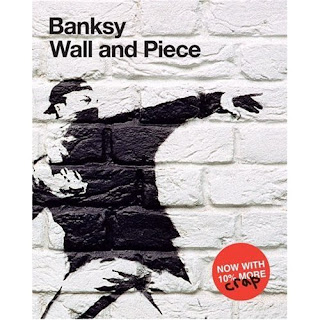 W is for Wall and Piece
The Rebel: You're friends with Banksy and you wrote some of the text of his best selling Wall and Peace book. Do you know him well?
Simon: "A man who claimed to be Bansky came up to me after a gig and asked if I minded him spraying some of my lyrics onto walls. I can't remember what he looked like but we did meet up in Stoke Newington once. It's not great when people come up to you right after a show just because I can't relax until my props are back in their box. Once in Aspen comedy Festival a man came up and said how much he loved the show and I said: "Not now. I'm tidying up." It tuned out the guy I turned away was The Simpsons creator Mat Groening."
The Rebel: "Doh!"
X is for Xylophone
Simon: "Unusually for primates my rib cage is xylophonic in structure. I often strum myself in tense situations."
Y is for Youth
< Simon: "A wise man once told me 'Use your leisure well, for the mind grows still long before the body."
b>Z is for Zoo
The Rebel: Which animal do you make a beeline for when you go to the Zoo?
Simon: "Giraffes, Giraffes you're having a laugh, your neck is so long you look like a graph." 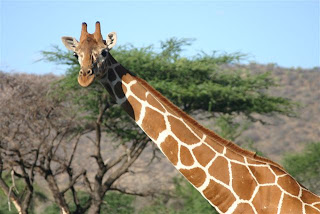 The Rebel: So you'd make a beeline to the giraffes?
Simon: Yes. I also like monkeys ... and bees. I'd make a monkey line to the bees if it wasn't illegal."
Posted by The Rebel Magazine at 07:43