Q & A with Uliana Apatina

"I'm Not Scared" is an event that combines live music and installation art. It takes place at The Chisenhale Project space on the 12th of April. Artist Uliana Apatina (pictured below) tells us a bit more... 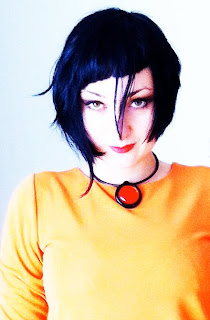 The Rebel: Where and when were you born?
Uliana Apatina: "1981 Siberia. It's not that scary place as it sounds – dreadfully cold in winter and boiling hot in summer, but beautiful in late spring when everything is blossoming in white and early autumn during multi-coloured leaf fall. And sky is always nice – strikingly blue, very deep and bright, and so endlessly high! Sometimes, it feels as if it hurts your eyes, especially at those specifically freezing winter days with magically sparkling snow. But it is an amazing sensation, indeed."

What makes you homesick?
"Nothing. Nothing makes me homesick, never did and I can hope never will."

Did you enjoy art school, was it how you expected it to be?
"Oh, yeah... I did love my art school! Loads of absolutely crazy experiments, infinite freedom, very important and close friends and a firm confidence in your ability to change the world and shape a new future."

Can you tell me about your Forest installation in the I'm Not Scared exhibition at The Chisenhale Project space?
"Forest installation, as you called it, or a forest of columns, a contemporary art museum or anti-museum to be precise. The prototype, let's say, for this installation happened to be my final work at the Architectural Association when I passionately wanted to create a new space for art rather than a sterile atmosphere of whiteness. I have always thought that a healthy confrontation between art and architecture would be good for both of them. That is why I like Guggenheim Museum in New York by Frank Lloyd Wright, although he had completely different from mine intentions. And a prototype structure is, in fact, different from the installation both in materials being used and functions they perform. Inclined steel columns of an anti-museum physically carry loads of floors and ceilings, while ropes of the installation being stretched in between a prepositioned floor and ceiling act as an illusion of those powerful beams. Though, both cases are equal in terms of their relation to art located in and around them – you have to see it through the forest with an angle of unpredictable viewpoints. In itself, actually, space formed by those ropes or columns is of a paramount importance. Experience of this space by visitors is crucial. Just a space. Just as an experience. For its own sake. Then, in 'I'm Not Scared' there is a wall of smiles [which by its structural grid makes a geometrical contrast to the diagonals] to see out of the forest and music to listen to – in a way, as I believe, those chaotic columns be they out of metal, concrete or rope, make a condition for the whole event to happen with a primary value on their own right."

What is the purpose of art? Are there too many artists these days?
"As far as I am concerned, art must change a universe as a whole and something inside the internal world of every human being. There always were too many artists at all the times – in a way, at least at this sense, our time is no more different than any other."

What's the best thing about The Chisenhale?
"Artists I professionally highly value who have become my close friends."

How long have you known Thom Driver - are you a fan or his music?
"The way I met Thom for the first time was during his performance couple of years ago. Oh, yes, I did like music a lot ! – that's why I wanted Piper's Son to be a music part of 'I'm Not Scared'."

What are your favourite books?
"I still like Julio Cortázar – especially 'Hopscotch' and all his short stories. Also, recently I have discovered Ayn Rand with a striking belief in a power of human mind, ability and action."

Which artists inspired you when you were young?
"Being very curious all the time, I tended to have loads of inspirations – but I'll tell you about the most memorable once. When I was a little kid, my father used to collect with me post stamps dedicated to art – Vermeer and Rembrandt meant a lot to me – on those tiny images. Later, when I became a bit elder than a kid and left Siberia for Saint-Petersburg, – I saw those works from the post stamps at their true grand scale in a reality of 'Hermitage' and became more than hundred percent sure of my choice. Bursting energy, restless search and driving power of invention idiosyncratic for the early 20th century influenced me greatly as an art school student, particularly the Soviet Avant-garde and everything related. Italian futurism with their manifestos. Picasso. Van Gogh."

What next for Uliana?
"I would like to make a solo exhibition of my hybrid painting-drawing-text works, perhaps on the day of my birthday."