Q & A with The Olive Branch 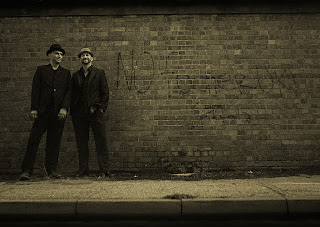 The Olive Branch are about to release their debut album: SKAFUSION. It features 10 original tracks which tell the story of two young boys (Phil & Stan) from two different backgrounds falling in love with ska after hearing the sounds of 2 Tone for the first time and their journey of discovery which takes them back to the 60's Trojan era right through the 90's third wave explosion. This collection of tracks inspired by their ups and downs and experiences of growing up is likely to strike a chord with many ska music lovers. For more info visit: www.skafusion.co.uk The Olive Branch’s main man Phil Todhunter agreed to answer a few questions for me.

The Rebel: How long has your album taken to make? What have been the highs and lows of the journey?
Phil Todhunter: “The album is a life long ambition of mine, if I had to put a time scale to it though I would say a year, some of the tracks were first recorded in 1988, but really got stuck into in January 2010 were three of the tracks were recorded and produced by Tran of Smoke Like A Fish, half of the album are musical collaborations with Stan from Walt Jabsco Recording’s supplying the tunes for me to write the lyrics for, which was a new experience which was very enjoyable. The other tracks were recorded in 2010 as well.”
What's your current favorite track on the album?
“I can’t really choose a favorite track, as I feel each one has its own personality’s and depends what kind of mood im in. When the coffee smells strong, means the most to me as it was inspired by losing three family members to cancer this year.”
What are your hopes for the album, what do you most want to achieve?
“I hope the album is well received on the Ska circuit, im realistic to understand there is no real money to be made but if Stan and I were driven by money we would be producing mainstream music, rather the music we have both been, transfixed by since out teens, hopefully as a songsmith it would be nice to get some recognition for it, like wise I think Stan would feel the same about his production skills.”
Who are your musical heroes and which new bands do you rate?
“My musical heroes are mainly the bands from 1979/81 The Beat have influenced me the most, they had an unique style of songwriting, they always made you think about the songs they were singing. Bands who I rate, Do The Dog has so many on their label my favorites are Cartoon Violence, Smoke Like A Fish, Too Many Crooks and Newtown Kings also watch out for Aggressors bc and a young band called The Headstarts.”
How do you relax / what makes you happy?
“ I relax by keeping fit lifting weights and running, making music videos and writing songs, all of these make me happy.”
What's best Dad or chips?
“Dad is best, I call him Jack of all trades and master of none, this guy can do anything very well, as long as theirs a manual to read.”

Do you play live?
“We have never played live yet which we hope to put right in 2011, we were booked to play Bustersbadlands but the council pulled the plug on the festival. We have had so much interest in booking us for live gigs.”
How did you react when your saw the images of Prince Charles's car being attacked by protesters?
“As a loyal Englishman thought it was wrong, people have the right to express their opinions but there is no need for physical violence, I use my music to express my views.”
How will you be spending Christmas?
“I will be spending Christmas with the family, Turkey and the trimmings and a few glasses of vino or two, and over the holiday probably some more writing for the second album which work has already been started on.”

Posted by The Rebel Magazine at 03:12