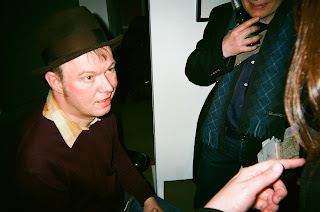 There will always be a place in my heart for the songs of Edwyn Collins and Orange Juice. Last thursday I saw the great man at his art exhibition in Shoreditch. It was a very well attended event. My favourite image in the show was of a pufin spreading it's wings. As well as buying Edwyn's new CD I bought some of his greeting cards which had a lovely drawing of a Robin on them. I got Edwyn to sign an old CD. It took him a while to write his own name and, as I waited, I remembered an evening many years ago when my friends and I went to see Edwyn sings songs of Hope & Despair at The Venue in New Cross (South London).
It was Spring 1991. Helping Edwyn on stage was a guitarist called Donald Ross Skinner. I remember Edwyn performing his song The Wide Eyed Child In Me because half way through the first verse his own lyrics gave him the giggles. The song began: "Just give me one good reason why you find me so displeasing and I'll gladly go the way I came but there's no method in your madness only unforgiving sadness and to leave right now just seems insane." I'd never seen a singer laugh at his own lyrics before. I also remembered Edwyn bringing out an 808 state drum machine to perform a new song from his as yet unreleased record Helbent On Compromise. Edwyn made many daft jokes. He pretended that his father was Phil Collins and claimed that the two of them had worked together on the track "50 Shades of Blue". The single had been a bit of a flop but Collins joshed that both he and Phil had been taken aback that it had gone on to be a worldwide number one hit record. Although the crowd loved him that night few would have predicted that 5 years later Edwyn's song A Girl Like You would be an international hit bought by more than a million people bought.
I was at the concert with several friends and we all enjoyed Edwyn's set. We were all A level students at this point. I remember Edwyn did a great version of Felicity (a track from Orange Juice's debut album.) I remember my friend Max didn't know about Orange Juice and so thought this was intended as a tribute to The Wedding Present. And, I remember, for an encore, Edwyn brought on a bearded Roddy Frame as a special guest. I think they performed "Consolation Prize" together before ending with "Place In My Heart". Donald Ross Skinner was on stage with Edwyn and Roddy for the last number and they took it in turns to make up new lyrics. Instead of: "Oh halaleuala - I'm gonna suck it to ya" Roddy sang: "Oh Mr Kinnock - I think you're gonna win it." And then Edwyn sang: "Oh Tommy Cooper I really think you're super."
Anyway, like I say, as I watched and waited for Edwyn to finnish signing these memories came flooding back. 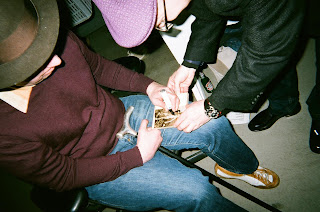 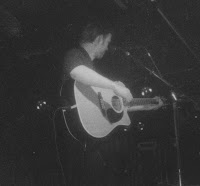 (Above image: A photo I took of Edwyn on stage in 1991. Below: Edwyns 2011 signature on the back cover image of his Greatest Hits c.d)

I love all of the sleeves of Orange Juice singles that Edwyn had a hand in designing. Orange Juice records were released on Alan Horne's independent Postcard Records label. Although Edwyn hit the big time in the 90s he never strayed from his Indie roots. I remember when he was asked why he stayed on Indie labels and if the money he made from his come back single would change him he quoted a famous line from the Declaration of Arbroath:
"It is in truth not for glory, nor riches, nor honours that we are fighting, but for freedom -- for that alone, which no honest man gives up but with life itself." I'm sure he had a smile on his face as he was saying it but there's many a true word spoken in jest.

It's a tragedy that Edwyn had terrible health problems and has lost the power of his right arm. But it is brilliant that he is still making records, touring and having art exhibitions. Here are three Edwyn quotes from the press release of his current show:
1) "Ornithology has fascinated me for a long time. I can't remember when I didn't love birds. when I was a boy, I could idenify every British bird, most of them on the wing."
2) "I had a stroke, a brain haemorrhage, in 2005. I couldn't say anything at all at first and I couldn't read or write. I couldn't walk to begin with. My right hand didn't work. I'm right handed. So no more guitar."
3) "But I think my real recovery began with my first bird drawing. And now I'm showing my drawings in an exhibition. I'm looking forward to seeing them like this." 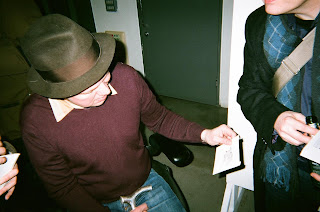 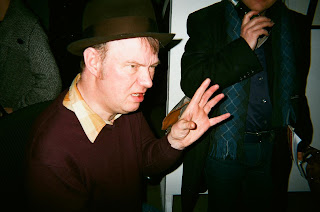 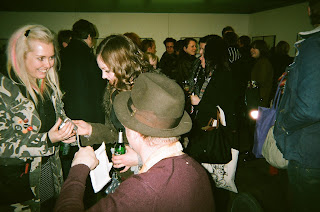 Shine on Edwyn. "See you in the charts".
Posted by The Rebel Magazine at 11:49