Q & A with Hugh Mendes

Over the last decade artist Hugh Mendes has been collecting newspaper clippings of obituaries and other world events. To mark the tenth anniversay of 9/11 he is showing paintings, drawings and original clippings related to the event and its aftermath, including a list of all those who died on that day. The exhibition takes place at Kenny Schachter Rove, 33-34 Hoxton Square, London, N1 6NN from Sept 9- Oct 1 For more info visit:http://hughmendes.com/ 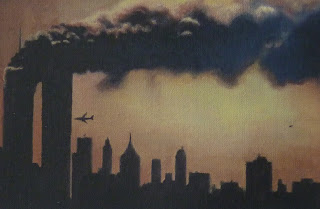 IMAGE: (Detail of "Eight Years On" painted by Hugh Mendes)

The Rebel: Are you excited about your new show?

Hugh Mendes: "Yes I am! That includes a certain amount of nervousness and anxiety dreams, some quite absurd. It is 10 years worth of work and I have been planning and working on it for over a year now. It is probably the biggest and most significant show I have had." 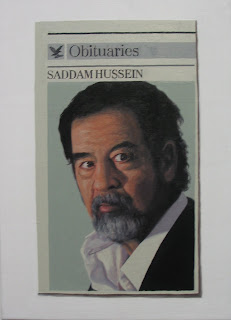 When you spend a long time looking at the faces of people like Saddam do you begin to feel close to them? Do you feel a sympathy for your subjects?

"I do feel a certain sympathy or empathy, especially with the obituary paintings. They are dead and I am paying tribute, memorialising them. Contemplating their lives. I sometimes do other things to 'tune in' to the person. For example when I was painting 'captain birdseye', I bought and ate a few fishfingers for the first time in years (I am a vegetarian). They were a staple of my childhood. I choose my subjects for a variety of reasons: iconic images, personal connections, interesting photos or portraits. I have to have a sustainable reason to paint them as it does take rather a long time. Looking at that face developing over a period of days or weeks. In the case of Saddam, I chose a particularly poignant image. He looks quite handsome, he is glancing worriedly over his shoulder. It was taken from an image at his trial. He had such an ignominious end. I could not watch that video of his hanging by what appeared to be a bunch of thugs wearing balaclavas. Obviously he was also a dictator and mass murderer, so there are at best mixed feelings. It is part of our collective history..."

Do you have any art rivals or are there any artists that you’re often compared to ?

"I was once compared to Gerhard Richter in a review in 'contemporary' magazine. That was rather flattering! I am very interested in other artists whose practice overlaps with mine. There have been many examples. Sometimes there can be a sense of mild jealousy when someone else has more success or sales, but generally I am happy with any artist's relative success and especially when it is well earned, or I admire their work. It can be slightly galling when a very mediocre artist is highly successful. The 'art world' is a fickle place, but I have to say I am very happy to feel a part of it, and even in the hub with my lovely studio in Hackney."

Would you be offended if a critic described you as a great illustrator rather than a great artist?

"I have not heard that term of distinction for some years. It was something people used to discuss a lot. For instance in David Sylvester's interviews with Francis Bacon, and when I was first at art school. I remember thinking of Hockney as a good illustrator, but unfortunately an illustrative painter. I just think of myself as a painter. I also do a lot of drawing, and collage work... I think that pejorative use of the word has almost lost relevance in this post, post modern era, or whatever it is...?"

Why did you pester Lucian Freud? What did you want from him?

It was after Francis Bacon died. Bacon used to live just near my father and they would see each other in the corner shop in South Ken. I used to think how I would have liked to see Bacon's studio. It was so iconic, as the archetypal messy artist's studio. I thought of Freud's studio in a similar way. I wrote to him asking if I could visit his studio. I have always had a fascination with artist's studios. I love snooping around in them. You can learn so much from a studio, such as working methods and practices. I love the smells of turps and oil etc. It is so evocative. I once stopped painting for a couple of years (took up design and film making). Then one morning I woke from a dream in which I was painting again, and opened a bottle of turps. I was immediately sent into a state of rapture from the smell. I have been painting ever since. Anyway, Freud bizarrely wrote back with a sweet postcard of one of his early paintings (in some ways my favourites). It said: Dear Mr. Mendes, please leave me be. I am running out of time'." 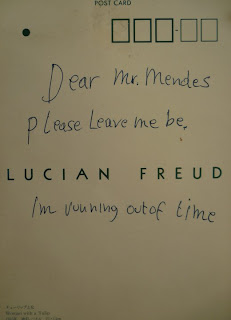 Did you get a good education?

"Yes. I had a good art teacher at secondary school. He was called Dick Lilley. My aunt worked in the local art school shop. I went to Saturday morning classes there, I guess in my early teens. I never really bothered with academic subjects at school, though I was good at English. I failed art A level, which when I went to Chelsea art school they thought was quite an unusual achievement. I was at Chelsea during what in some ways was its hey day. Staff included Hockney, Uglow, Aitchison. Sometimes they took the piss and were drunk at lunchtime. But I learned a lot about colour, drawing, tone. Also printmaking and working 9-5, every day. I was hanging out with artists. Also we hosted the first couple of Sex Pistols gigs... the kids from down the road at Mclaren and Westwood's 'Sex' shop. I then had a bit of a break between my BA and MA, including a 7 year sojourn in the states. I came back here in 2000 to do an MA at City and Guilds art school. That was a major turning point. As is well documented, I graduated on 9/11. Since then, its just been painting, teaching, curating, having shows all over the world. Its been a good ten years leading up to this forthcoming 'anniversary' show."

What was the last piece of music you heard that you really made a connection with?

"I love music and listen to a lot. I enjoyed PJ Harvey's last album 'Let England Shake'. I listen to a lot of Jazz. Like Charlie Parker, or Sun Ra. Sometimes I can't listen to music with lyrics when I am painting as I have to be able to really concentrate. When Guru died, I bought and listened to a lot of his music. Like the first Jazzmatazz album. Weird mix of Jazz and Hip Hop. I listened to lots of Wu Tang Clan when painting ODB's obituary..."

Are things going well in Hugh Mendes' world? Do you feel quite perky?

"Generally pretty perky thanks... I recently got engaged...I am highly energized in the run up to my show. I enjoy working really hard and consistently over a sustained period of time."

Van Gogh once said to his brother: “It depresses me to think that even when it’s a success, painting never pays back what it costs” Can you relate to this way of thinking?

"I find it very rewarding. It certainly can be frustrating as well. Generally it gives back what you put in. I feel that generally about life. I enjoy my life and my life as an artist. I love coming to my studio. Drinking coffee, looking at the newspapers (that's different to reading them!). Painting, thinking, etc... Sometimes I think I would like to sell more, but that's a different kettle of fish..."

Is it important for artists to sometimes question everything about their own work?
"I would think so. In a way, one is constantly questioning everything about it. I know some artists find this very difficult, even undermining. I enjoy that aspect of it. Having to think really hard, engage deeply and repeatedly. I do quite a bit of teaching and that certainly helps with that process. Having to think about art and painting. Looking at other peoples work a lot. I have always been fortunate to have a lot of artist friends who I respect and can engage with in that way. I like going to shows and looking at great works of art. Unfortunately of course one sees a lot of terrible shows as well... But you only need to see one thing that is fantastic to be totally inspired and driven back to the studio..." 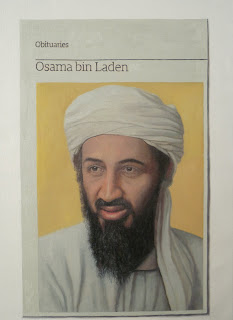 Posted by The Rebel Magazine at 11:30