Q & A with Marcus Cope 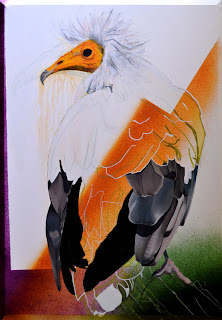 1) Why did you start painting and why do you continue to devote so much of your time to it?
Marcus Cope: "I guess I must enjoy it, although it doesn't always feel that way when I leave the studio. Like a lot of artists I was good at drawing at school and made the traditional route through A-levels, Art foundation, BA and MA, and I'm still doing it. I guess giving up would feel like failure (That's why I never wanted to give up smoking). I remember there was an expectation from my parents that I would go to university, as my elder brothers and sister had. Obviously I wanted to go against that. My dad was an abusive man and an alcoholic, so when the time came it seemed like a good opportunity to leave home and get away from him. I was a bit of a slacker when I was younger and I only did two A-levels, Art and Design & Technology (which I like to think of as 'Drawing & Painting' and 'Drawing & Making') so my only option for further study was the Art Foundation. I was drawn to painting because of it's simplicity I think, you have all your tools and materials with you ready in the studio at the start of the day. The focus of the day is what is going on in that square or rectangle (etc) in front of you."
2) Tell me about your show in Redchurch St - are you feeling smugly confident about it?
"The show is at studio1.1 and will consist of nine paintings all featuring a different species of either Old or New World Vulture. It is called 'Carrion', a play on words (relating to the previous question 'carry on' and also what vultures eat). I'm pleased to be having a show at the gallery so soon after my last, as it has directed my focus, and given me an urge to develop a very different show to my last one. The works in this show are much more disciplined, and will sit together as a clear series." 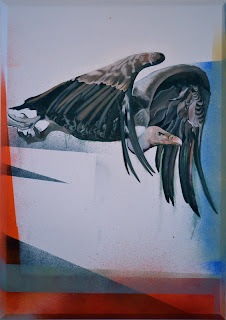 (Above image: 'Gyps Rueppelli', 120 x 85cm, oil on canvas, 2011)
) What are the people who run that space like? Do you think getting on in the London art scene is all about who you know and who goes to the right party?
"Michael Keenan and Keran James run the space, and they are both very thoughtful and enthusiastic about the art that they show. Keran is an artist as well so he is very understanding of what you are trying to achieve. We are friends now etc. I've been in very few shows in London that have not been organised by people I know, it's surprising because I am such a good painter, but it does emphasise that thing about networking, and yes, it is usually who you know. I'd still like to think that quality rises to the top. It also highlights how few people look beyond their own circles of friends/contacts when curating shows."
4) Do you think art should always be free for all? Would you consider charging people £1 to enter to see your current show? (Or maybe they could give you gifts instead of money)
"I'm surprised that people look at art who aren't artists. I wonder what it is that they get from it. I like it when you pay for a show because it really makes you wonder what the act of looking is all about. Whether it's worth more than seeing reproductions, or whether the money could be better spent elsewhere. These days the Tate et al are selling exhibition catalogues for just a bit more than the exhibition entry, I often feel greater desire to purchase that than go into the show. Charging people inevitably puts some people off, which isn't really fair as many artists are very poor. For commercial or independent galleries it's a different situation because they don't have the overheads of the major galleries. Lot's of artist run spaces run a bar at the private view to help cover the rent etc. It's great when lots of people come to see your show, why put them off by charging? If they really want to pay they can just buy one!"
5) Are there any things about the art world that you'd like to see stamped out?
"There is a problem with exploitation, which probably stems from there being too many artists, and too many of them with career aspirations that outweigh the quality of the work they make. There is too much unhealthy commercially focussed competition amongst artists in London. It's quite sad really."
6) What's next for Mr Cope? Do you have your next 3 shows planned out?
"I'm in a four person painting show in Newcastle in a couple of months that a very good painter called Kevin Mason is putting together, then it's going to tour to York University in 2012. I'm also going to be curating a show in December at a lively new gallery called B&N opening soon in Shoreditch. The third thing you'll just have to google for....if you are that kind of artist."
7) What are the best things about being Marcus Cope?
"Having friends like Harry Pye!"
8) Do you like giving lectures to young art students?Can you imagine doing more teaching as the years go by?
"Of course I do. They are so enthusiastic and open and unfazed by the art world. I'd really relish a teaching post but it seems to be getting further away from me now that more and more failed artists are doing that PGCE nonsense, taking all the jobs away from artists who are more concerned with their own practice than buying a house."
9) My friend Rowland says you sometimes look like Tommy Cooper. Do you think his comparison is fair enough?
"Yeah, why not? I liked it when I was living in Cyprus and you sent me an email saying your friend John thought I was a poster boy for some ad campaign. Perhaps it was Calvin Klein...?"
10) There's a saying: "Writing is re-writing" do you think good painting is all about editing?
"If only I'd had time to re-write these answers.....Too right it is. My favourite paintings (usually), are those where you can see the errors, or the underpainting, the layers and the painting's history. The thing about painting is that it is not design, you can't just draw it out and colour it in, and even when you try, the results are usually pretty dull. Perhaps this goes back to an answer to the first question, the reason I still paint is because making a painting can (and should) always still surprise me, and often does." 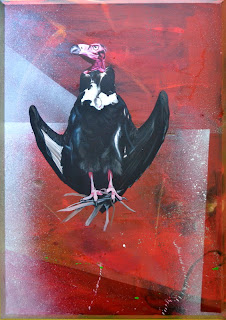 Posted by The Rebel Magazine at 00:44