Andrew Moss of The Chancery interview 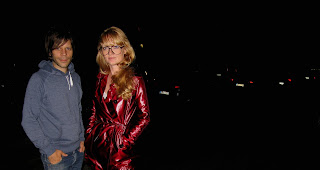 Have a listen to The Chancery: http://www.myspace.com/thechancery
Andy Moss was kind enough to answer 10 questions for us...
1) How have your musical tastes changed over the years? Do you still love any of the bands that you loved as a teenager?
"My tastes are much broader these days and I guess that comes from living in Berlin. It’s a good city for musical exchange. A lot of what I’m listening to at the moment I’ve picked up from going to the concert, without really knowing the record beforehand. I never really followed trends but I might check the label if they’ve put out something good.  I’ve always been drawn to singers and I still love the bands I loved as a teenager, though some of them I can’t listen to anymore. But there are those that I continually rediscover."
2) How highly do you rate yourself as a musician?
"I’m not technically good and I get bored playing one instrument. I’m good at knowing what to leave out."
3) What's the best song you've done so far and why is it your best?
"Estuary Road. I usually struggle with lyrics but this one seemed to write itself. It’s probably the most personal song I’ve written to date and it’s attributed to somebody very dear to me who passed away recently."
4) Whose opinions of your work do you take the most notice of?
"The neighbours’."
5) Is there a part of you that feels your life is getting better every day?
"Every second day."
6) Why is your band called The Chancery?
"Nobody seems to know what it means, and I like that. We were stuck for a name so we decided that it should be a word ending with’ry’. In government it refers to an office of court, or embassy, and that interested us in relation to music production. Plus, it includes the word ‘chance’."
7) Which producer would you most like to work with?
"Phil Spector."
8) Which band or singer would you most like to produce a record by?
"That’s a hard one...maybe Yoko Ono. But it would have to be a folk record."
9) Do you have much money?
"Too much."
10) Which countries have you travelled to and which brought you the most happiness?
"India, Morocco, Spain, Italy, France, Belgium, Germany, Switzerland, Poland, Norway, Sweden, Denmark, Holland, the US. The most happiness? India, without a doubt. I went there earlier this year for the first time. Arriving there seemed as though I’d been living the last 10 years in black and white and then suddenly someone added colour. I think it’s the people that really make the place."
Posted by The Rebel Magazine at 13:53