Interview with Gemma from Trogons

Listen to this:
http://soundcloud.com/trogons/rare-earth-metals
It is the sound of Trogons.
The Rebel Magazine asked Gemma of Trogons to answer 20 Questions.
Now read on...

1) What was the last record or CD you bought or downloaded?
Gemma: "Thrones-Sperm whale/white Rabbit."
2) John Lennon said, “Genius is pain”. Which member of Trogons is the most in pain?
"John Lennon was the worst thing that ever happened to Yoko Ono."

3) Can you list 3 things that never fail to make you cross?
"I have crossed myself in the past at Malcolm Mclaren's funeral procession, looking up at the roof of the Vatican and whilst watching TV on September 11th 2001."

4) Are you as happy in a studio as you are having an afternoon nap?
"To be unconscious is never true happiness."
5) If you want to be in a band is important that your band is a big as possible?
"As in members or publicly gauged success? either are irrelevant. I want to literally play out my fantasies and anyone is welcome to join in, enjoy or critique."

6) Which living person must sums up the term “cool”.
"I thought it was Kim Deal but i googled 'cool person' and it is actually Kate Moennig from the L word."
7) Where would you like to be this time next year?
"The Guinness book of records."

8) Which of your lyrics are you most proud of?
"Usually all the lyrics of the most recent song I have written, in this case 'Sci-Fi Landscape 600X900'."
9) When do you look your best?
"I guess everyone looks their best when they have something exciting going on and their face is 'lit up' with the joy from it. I think I look my best with a shit eating grin."
10) What is the biggest problem facing the world today?
"The existence of money."
11) Who do you love most in the world at the moment?
"My brother wherever in the world he may be."

13) Do you ever buy food from Iceland?
"No."
14) What is funky?
"Betty Davis is the epitome of funky listen to F.U.N.K and try and tell me otherwise. She is brilliant!"
15) Has Boris Johnson being mayor and David Cameron being prime minister (so far) been less bad than you thought it might be and are you optimistic about the future?
"In my view quality of life is important and good cultural and creative outlets need to be available to people in balance with education, healthcare and financial benefits prioritised where needed. With all new people in a new role , these two want to make their mark and leave their legacy, shake things up, the problem is that the taxpayer funds their attempts and there will always be people worse off that before and some better off. Both have made questionable decisions but inevitability who knows what the right way to live on this planet is, our laws and the systems by which we live have been developed by mere human beings. I think that we have dug ourselves in deep the wrong way, smothered the earth with layers of concrete and should probably at this point be considering that first or 'primitive' people as the west might view them have a far deeper understanding of a successfully functioning society, sustainable living and good quality of life in essence there needs to be a bigger rethink and overhaul."

16) What’s the best concert you’ve performed so far?
"Our first gig is tomorrow so ask me this again."
17) Which of the big music magazine would you most like to be on the cover of?
"High Times or SFX."

18) Do you prefer heavy metal to barbershop singing?
"Of course , but barbers wear red and white which represents their past service of bloodletting and the bandages used afterwards which is cool in a heavy metal way."
19) Do you have any relatives who love you but hate your music?
"I have plenty who aren't interested in my music even enough to hate it. My immediate family seem to enjoy it."
20) What do you wish someone had told you when you were a teenager?
"The lottery numbers for the following week and not to bother paying £8.50 to see Terminator Salvation." 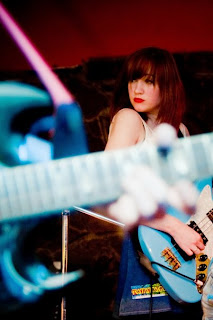 http://www.myspace.com/trogonon
Posted by The Rebel Magazine at 14:50