Paul Gorman has put together a brilliant book about the artist Barney Bubbles. A special exhibition featuring some of Barney's work is being held at The Chelsea Art space run by Donald Smith. Bubbles designed logos for NME magazine, Strongbow Cider and The Blockheads. He worked a lot for Stiff records and Elvis Costello. He also directed pop videos including the classic Ghost Town video by The Specials. The private view party/book launch was attended by Humphrey Ocean, Mick Jones, Nick Lowe, and Jerry Dammers.
For more info go here: http://www.barneybubbles.com/blog/ 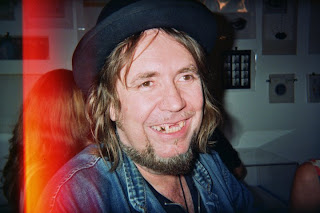 (Above Jerry Dammers of The Specials who wrote Ghost Town) 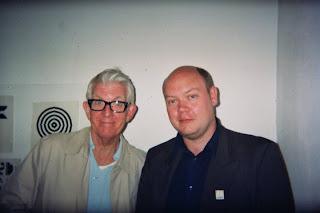 (Above: Nick Lowe with Harry Pye. Photo by Julian Wakeling) Nick "Jesus of Cool" Lowe was the in house producer at Stiff records and had a hand in such classics as Neat Neat Neat by The Damned, Pump It Up by Elvis Costello and Stop Your Sobbing by The Pretenders.
Posted by The Rebel Magazine at 06:13