Mick Harvey co founded both The Birthday Party and The Bad Seeds. His solo records include Pink Elephants, Intoxicated Man, One Man's Treasure, Two of Diamonds, and Three Sisters. 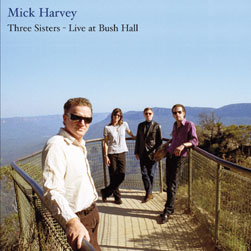 The Rebel: What was the first artwork to catch your eye and mean something to you?
"Very hard to remember from my youth, but Blue Poles by Jackson Pollock comes to mind. It was purchased by the Australian Government back in the early '70s and it's acquisition caused quite a stir. The Australian  public were confronted with aspects of artistic value, aesthetics and personal taste which are not normally on the day to day agenda in this sports obsessed country. I finally saw the painting in Canberra a few years ago and it is fabulous. Can't imagine what I thought of it in my early teens. I think it cost $2 million when they bought it but must be worth many times that now. The only other likely candidate would be some of Nolan's Kelly series which remain essential Australian iconography and have been know to me since childhood."

(Above Blue Poles by Jackson Pollock painted in 1952)
The Rebel: Is it important to feel nervous before a show and anxious about a record being released? (The idea being if you’ve not bothered the show or CD can’t be that good).

"Probably, though nervousness and anxiety can take many different forms. More recently I have found that if I'm just playing an instrument (as opposed to singing) I don't become anxious or start pushing myself until I'm on stage. There must also be an argument for some music being better if performed when one is undistracted by tension, and that doesn't only apply to gentle music. So the answer would have to be, not always. "
The Rebel: Unless their song is used in a film or something bands now only seem able to make money if they tour. Is this a good thing in some way it should it be easier for musicians to be studio based and live off royalties from sales of their songs?
"Some people would argue that the live environment is where music is in it's most "real" incarnation and welcome these recent developments as a good thing for music in general i.e. a return to that participatory/exchange situation. I certainly don't think it's a negative thing but I would prefer it if musical artists and songwriters could earn money from all the potential sources that exist. Most of them need every penny they can scrounge."
The Rebel: Do you relate to this quote from the artist Jeremy Deller: "I work because I'm interested in other people. I'm nosy. That's why I enjoy collaborating with other people - a good collaboration is like going on a long journey without a map, never knowing quite where you will end up."
"I'd agree with the second part but I certainly don't work because I'm interested in other people. I work because I'm interested in expressing myself and looking for exciting ways to express ideas. I'm also interested in people and like collaborating but they are not inextricably linked."
The Rebel: Which kind of art tends to move or excites you more? Are you more likely to head towards a room full of  Dubuffet/Art Brut and Outsider Art. Or a room full of British Romantic artists such as Reynolds, Turners, Stubbs & Constable. Matisse and the Les Fauves or the latest Brit Art videos and sculptures?
"I'd go for the Art Brut and the Turners. Though I don't think most of Turner's "impressionistic/expressionistic" work has anything to do with Reynolds, Stubbs and Constable. It's in a world of it's own, which is probably what would attract me to the Art Brut as well."

The Rebel: Can bands who all got on as great mates make great records or does there have to be a little tension?
"Even as great mates there can be tension when working together on a creative pursuit just as there can be an easy, workable creative relationship between people who don't get on that well on a personal level. Anyway, I don't think there has to be "tension"
The Rebel: What is the most broke you’ve ever been? Were there any positive sides to being in poverty?
"That's like asking, "how long is a piece of string?". In the late 70s I really had no money to speak of. I guess I was in Melbourne and able to go home or stay at my girlfriend's parent's place. From then until the late 80s it was pretty much hand to mouth. We didn't make any vaguely significant income until '87/'88. What's positive is debatable but at least I learnt that I'm not making music to make money. I continued with it for all those years despite living in virtual penury."
The Rebel: Is your house filled with instruments? Is there a guitar and note pad by the bed etc
"No, there is an upright piano and a guitar and a ukelele. Apart from that all my instruments are in my music room in a building around the corner."
The Rebel: Have you met any of your childhood heroes and not been disappointed by them?
"I'm not much into having heroes and I can't recall having been disappointed when I've met people I admired when I was young. The possible exception is Lou Reed, but technicalIy speaking I never actually met him, so the answer remains, no."
The Rebel: What are you working on at the moment?
"3 albums - one which is a writing project which I hope to complete first, the second is another album similar to the last 2 (One Man's Treasure & Two of Diamonds) but probably a bit more conceptually structured and  more a mixture of original songs and interpretations. And the 3rd., if I get to it, would be an album by my rowdy side project The Wallbangers."
The Rebel: Lou Reed does shows in which he performs everything from Berlin and Brian Wilson has done shows where he plays all the songs from Pet Sounds etc. If you were to do that which album you’ve made would be the most interesting to re do on stage?
"It has been discussed with a view to doing a "Don't Look Back" and I still think the obvious (and good) choice would be Murder Ballads."
The Rebel: What do you think drives you to make music?
"Most of the time it's just other people asking me to work with them and me thinking it seems like a good idea. As for the motivation behind my recent solo work, I think it has become a kind of quest to find what really matters to me in my life, generally. "
The Rebel: How lucky have you been with managers and record contracts? Is there any advice you wish you’d received?
"Overall I've been very fortunate. There have been hiccups along the way but having had Mute Records and Daniel Miller as the centre piece of my business set-up has been incredibly empowering and stabilizing. As for advice.... find someone who is happy to give you artistic freedom - accept nothing less."
The Rebel: Are there any books or records that you love so much you have bought several copies of and given away as presents?
"Recently I found copies of The Hit, one of Stephen Frears' early features, in the bargain bin for $5, I bought several copies. It's a great movie and one that many people are unfamiliar with. That's pretty much my criteria for passing on music too - great albums that aren't well known, that are the sort of albums which keep resurfacing in conversations. But these days one doesn't really repeatedly buy copies. In fact that hasn't been the case for ages. Even when I was young everyone made cassette copies. These days it's burning a CD and in principle I have no problem with that, it's just a way of helping people hear more music, it's up to each individual if they then buy music or not. Some of the things I find myself repeatedly passing on are Nina Simone compilations, the second Suicide album, Mark Lanegan's Bubblegum, the Jever Mountain Boys album, Mother Juno by The Gun Club and Man by Neneh Cherry."
http://www.myspace.com/mickharvey

Posted by The Rebel Magazine at 03:33