Q & A with Orpheus Knoxx 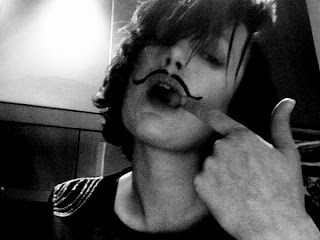 (Above Erica from Orpheus Knoxx) http://www.myspace.com/orpheusknoxx

The Rebel: What is the story behind ORPHEUS KNOXX? Where did they name came from and who is in the band?
Erica Macarthur: "Orpheus in greek mythology could charm people into doing pretty much anything with his voice, so I thought it was pretentious and ambitious to take his name. Knox is an American name I’ve always liked, so we might think of Orpheus Knoxx as a sort of contemporary cousin of the greek version. My bandmates are Grant Purser, who besides from being a way excellent drummer is also the gatesman for several safe houses in London for people with mental health problems. My guitarist, Nicholas Horne, has been bewitched by some beautiful American woman so is leaving us soon. It’s a sad eye I cast over his damp umbrella when I realize we’ll no longer career around London together like a pair of drunk flappers. I’m looking for a replacement, call me if you’re interested, I’m not in the book."

2) You used to be in white rose movement - what were the highlights of your time with them?
"Playing big shows like Coachella in the UHB’s desert playground, Munich Olympic stadium with Placebo, we’d nearly sold out the bowery ballroom in NY before I'd ever been to the US, and everything broke on a big stage at Benicassim but everyone was going really wild. I'm really proud of being in the video Rojo made for the song Alsatian. Being photographed by Mike Figgis and Mick Rock also stands out….it’s hard to quantify, to be honest it was 30% the most amazing time I’ve had in my life and 70% hangovers in airports."
3) On your myspace page you describe your sound as being like a "slightly sad woman in a shed with a cold" and that you're influenced by hamburgers. Can you tell us more about hamburgers and your shed?
"There’s a certain kind of American dream of the 1960s and 70s that I’m quite obsessed with, that in itself is still cast in the glow of a sunbeam of the 1950s. That’s why I think of Hamburgers, this perfect little thing, replicated endlessly. That all started with Andy Warhol when I was very young and never stopped. It's become more difficult since I got into Baudrillard's theory of Simulacrum and his writings on Disneyland, but a lot of that kind of pop imagery still makes my heart sing. My shed is at the end of my garden, it’s pretty neat. It’s got a radiator and synths and guitars and amps in it, and a picture of the Eiffel tower and an old ship."
4) Can you name 5 great new bands that deserve to be rich and famous?
"Birds of paradise, Kasms, Perfume Genius, Breton, A Human"
5) Kurt Cobain and Peter Cook died around the same time. David Bowie said he was far more affected by Cook's death. Which death was the biggest blow for you at the time?
"I didn’t care about either at the time because I was 11, but I like the idea of Peter Cook more now than Nivarna’s music. I loved Bedazzled, especially the fact that Dudley Moore’s suicidal character worked in a Wimpys resturant. Kurt on the other hand really committed suicide, which is a pretty wimpy and stupid thing to do."
6) How do you like to relax?
"By learning French, and learning how to drive. Ideally I’ll eventually practice both speaking french and driving in my pyjamas."
7) Is the only time we get to see the real you when you're singing on stage?
"No, so far I’ve been generally terrified onstage with Orpheus Knoxx. Sometimes one of my legs shakes uncontrollably and my neck goes red. If that's the real me I'm screwed."
8) Which of your songs are you most pleased with?
"I think the song Ice Cream, which is almost a nursery rhyme, but was vaguely inspired by a passage in WG Sebald’s Austerlitz. It’s about a boy stuck in a drowned village who was left behind by an evil man. He was meant to wait for me by a tree, but the man took him, and now I can only hope that he dreams of ice cream and horses in his watery prison."
9) Which words or phrases do you use most often?
"I love you. Do you have decaf?"
10) Who would you rather have as your dad out of Midge Ure or Bob Geldof?
"I think I’d rather not have a Dad under those circumstances."
11) Who would you rather have as your mum out of Annie Lennox or Mo Tucker?
"Mo Tucker. Although Lennox’s powerhouse beauty in eurhymics early videos did do something for me."
12) Why do singers sing?
"Because they want to be let out of their cage"
13) Do you see your audience as being your parents?
"No, I have no need to replace my original parents. Original and best."
14) When was Paul Weller at his best (or is it yet to happen)?
"I’m not sure, he seems too controlled to spin out in this last half of his life and do something I’d really like. I think Wild Wood was probably the only time in my youth I worshipped him to some extent."
15) Which of the 7 deadly sins are you most guilty of?
"Vanity and lust really get in my way sometimes."
Posted by The Rebel Magazine at 10:43