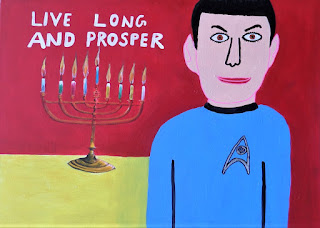 Leonard Nimoy is the much loved Star Trek actor who, from 1966 to 2013, played Mr Spock. Spock is known for the words, "Live long and prosper" and also his Vulcan salute. 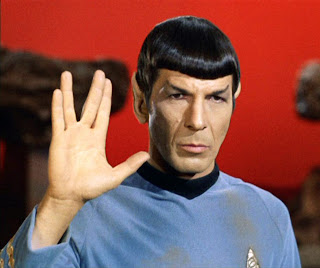 In his 1975 autobiography I Am Not Spock, Nimoy, who was Jewish, wrote that he based it on the Priestly Blessing performed by Jewish Kohanim with both hands, thumb to thumb in this same position, representing the Henrew letterShin (ש in Square Script, or Paleo Hebrew 𐤔‎), which has three upward strokes similar to the position of the thumb and fingers in the gesture. The letter Shin here stands for El Shaddai, meaning "Almighty (God)", as well as for Shekinah and Shalom. Nimoy wrote that when he was a child, his grandfather took him to an Orthodox synagogue, where he saw the blessing performed and was impressed by it

“Harry Pye’s playful, skewed and slyly subversive visions of a brighter, better reality are the perfect antidote to a world of woe. His paintings are a delightful and, at times, poignant riposte to all the po-faced, cynical and joyless cultural landfill cluttering up the place”

— Stephen Ellcock, author of, All Good Things
Harry Pye graduated from Winchester School of Art in 1995. Over the years Harry’s paintings have been selected for shows at; The Barbican, Calvert 22, The Discerning Eye Mall Gallery, The Bankside Gallery, The Creekside Art Gallery, and festivals such as; Elefest and Deptford X.

Pye’s work featured in two group exhibitions at Tate Modern; Save Our Souls, and Inside Job. His paintings have also been exhibited in galleries in; Australia, Brazil, China, and Denmark.

Pye paintings have been sold to raise money for charities such as Art Against Knives, Break Through, Action For Children, Kids & Co, CARA, Depression Alliance, Friends of the Earth, and The National Brain Appeal.

His paintings have appeared on record sleeves, posters on the underground and the cover of the Tate Staff Handbook. His work has appeared in numerous publications including; The Times, The Guardian, The Evening Standard, Frieze, and Turps Banana.

His collaborative exhibition with Jasper Joffe (Joffe et Pye) was rave reviewed on BBC Radio 4. Speaking on Saturday Review, The director of the I.C.A, Ekow Eshun’s response to the show was: “Intense feelings about love, loneliness and fear, anxiety, desire and hope, and ambition all come into play into these paintings. Very powerful I thought. What could have been fey, arch, or game playing was actually very warm. Harry was the winner of the Daily Mirror’s Paint Tony Blair competition judged by Gilbert and George. The Week magazine said of Harry’s work, “Pye's apparent naivety is accompanied by a strong sense of construction and design. Their directness and humour are appealing” And the critic Ana Finel Honigman described him as one of “London's premiere puckish artists and curators.”

Posted by The Rebel Magazine at 23:30 No comments: