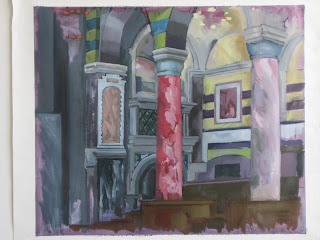 The Rebel: We last met at the Marmite Prize event that took part in The Nunnery. Did you have mixed feelings about entering the Marmite Prize? Do you often enter competitions etc?
"I was chuffed about getting selected, I think it is very random to get selected, I cant figure their logic forwhat they chose as a whole, its like shopping at Sainsburys, a bit this, bit of the other....;...I had some faith in my painting because people had commented on it quite instinctively and were drawn to it."

The Rebel: Tell me about the painting that is in the Marmite Prize - why did you select that particular work and how did it come about and how long did it take to make?
"I made it because Suzie commissioned me to paint that hillside, her Mum bought a plot of land had built a summer house there and turned the hillside into a beautiful garden of trees and a farm. When i painted it , it had all gone to ruin as it had been requisiioned by the local city government to be develope;, she was forced to sell up and this bit of her world was bulldozed, the house is gone. I have another painting of the hillside without the house, only piles of orange earth instead of the orange roof.
I wish that I was commissioned to paint all the time, that would solve a lot of problems for me."

The Rebel: What do you think of this recent quote from Laurie Anderson:
"Artists are just niche-ing their thing and then putting up their billboards saying - look at me."
Do you think artists all say "Look at Me" or are there a few around saying "Look at this"?
"It's just part of that poliferation of the artlike looking things industry led by Tate Modern.
I am optomistic lately about a shift in attitude. Recently I went to see Paul O'Kane and Tina Hague speak about their work at 'Lo and Behold' gallery; the gallery run monthly open discussions or crits around artists work. The following month they asked me along with Gary Colclough so I put my work up and had a great evening. I was suprised by how real and engaged the conversation was. I was talking to Tamsin Clark from Studio Voltaire about this and she said she'd been to artist's talks at Ryan Gander's place with David Batchelor (where someone had refered to David's work as 'womble art', which is funny but also OK that stupid things can be voiced and answered). Recently my friend Chad McCail held an open crit/feedback session for his new work 'systemic' at Laurent Delaye's gallery, which was brave of him. But the work gets studied and people get right into, get a lot more out of it rather than just looking at things which they do like or don't like for some irrational or momentary reason they don't even remember 2 seconds later. The other week Eileen Daly and I went up to Liverpool to interview Paul Rooney about his writing which I think is genius stuff, the effort has to be made but it is so rewarding too...so there is lots of people looking beyond their own blind desire for recognition...I often meet Andy Graves, who is great painter, and his line in amongst our chat is 'what about this?' as he pulls out yet another brilliant painting. I can't imagine not having these conversations and that artists discussions are becoming more widespread feels like a relief in this two tier celebrity/outcast culture."
The Rebel: What else have you been working on this year? Is your painting going well?
"I've been working on photo collages, they're very simple things and very aggressive cut and paste literally I have some new paintings, interiors again, this time a very grand church interior which I am hopeful about plus some figure paintings, heads really which I am nervous about."
The Rebel: Do you like this quote by Billy Wilder "If you're going to tell the truth at least make it funny because if you don't they'll hate your guts"
"I love Billy Wilder movies, Ace in the Hole with Kirk Douglas is an old favourite, S and M circus roll into shot in one scene. The film is about a newspaper man (Douglas) and a trapped miner whose plight has been exploited by the 'hack' so he's become a national celebrity, like the Chilean miners story only Wilder's miner dies.....I guess with the truth people are going to hate you anyway, I mean if you are talking about 'the truth', if you could ever deliver something like that......"
The Rebel: What was the last painting (or exhibition) you saw that you really made a connection with?
"I saw Herzog's Cave of Dreams the other night and it was really great. I think they are more drawings than paintings, the film and archeologists insist on calling them paintings but they are so graphic, much more like language. Theyre, so it's like that thing one does as a child when with your eyes closed you trace around shapes in your head. There are shapes for animals that are set shapes and there are set movements in the hand and wrist which perfectly tune into making that line that describes them.
There is one rock with 20-30 roundish reddish marks made on it with the heel of someones hand rubbed in a circula rmotion.it is staggering obscure and as modern as anything I can think of, it is utterly dumb and uncompromising, thats far more mind blowing than than the pictures of the animals which in many respects are more well behaved, or can be managed through language; highly self-reflexive and contextually aware and all that curatorial justification shit explanation card stuff we have to put up with."
The Rebel: Where did you study - which tutors were most helpful to you?
"UG.Goldsmiths (Sam Fisher, Andrea Fisher, Jean Fisher, Carl Plackman, Ferris Newton, Elma Thubron, Michael Craig Martin) PG. Jan Van Eyck Academy: (Andrea Fisher, Willem Oorebeek, Yehuda Saffron, Jon Thompson)"
Posted by The Rebel Magazine at 11:28