Q & A with Thom Driver

Thom Driver a.k.a Piper's Son will be playing live at the "I'm Not Scared" event at Chisenhale Project Space in Bethnal Green next week. 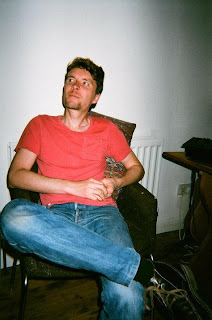 The Rebel:How many instruments can you play and which ones are you best at?
"Five, to a reasonable degree of competence. Drums are the most fun, but I'm probably best at guitar or bass. I'm recording an album at the moment so I'm turning my hand to a lot of other things too. I'll try anything percussive, stringed or with keys, but I can't blow, so wind instruments are out of the question." 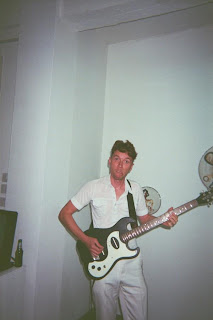 (Above: Thom on stage with Arthur Brick)

The Rebel: Why are Piper's Son so called? What's their history?
"Because I'm rubbish at thinking up names. Piper's Son was suggested as semi-joke by my ex-girlfriend's mum, and I was drawn to the slightly lame pun involved. I don't think either of my parents ever smoked a pipe. The 'Son have an immensely rich and brilliant backstory, but I can't be bothered to make any of it up at the moment..

You once interviewed someone called Cautious Daredevil in an issue of the Rebel, and I always loved his answer to the band name question. I'd say that mostly you think of lots of utterly shit names, only to settle on something which alternately seems brilliant, then only just bearable. If the name is going to work, you have to grow into it and let it grow around you. But I also think it's healthy to shake yourself up once in a while, so I'll probably get rid of it at some point."

The Rebel: Which songs will you be playing at the Chisenhale project space?
"Four off the last EP, then a few from the new album, if I ever get the words finished - lyrics are an eternal thorny problem. I have a friend who can go off to the pub for a couple of hours then come back with half an album's worth (yes I'm envious), but I've never cracked a way of writing words that doesn't involve weeks of scribbles, frustration and broken pens."

The Rebel: Do you get nervous before performing?
"Oh yes.. in fact I'm tensing up now thinking about it. I used to just drink loads, but eventually that becomes really embarrassing and instead of nerves before playing you have self-loathing after. So now I adopt a zen-like aura of utter calm which is then reflected back by everyone around me, resulting in a genuine internal calm. Or at least that's the idea."

The Rebel: What's you favourite album?
"Totally impossible to boil down to one, or even ten! Afraid I'd be hopeless on desert island discs. This morning I listened to Konono No.1 and a Caetano Veloso instrumental. They're both really good."

Are you driven and ambitious?
"Only in taxis. Seriously, I have sharp outpourings of drive and ambition which can dry up in an instant. Getting older is good because you gradually work out how to tap and control them in a sustainable way."

The Rebel: How good were One Norwegian Lady? Are you still in touch with your former band mates?
"The 'Lady claimed much of my young and wild years, so I will always have great fondness for her, including all the highs, lows, blood, fun, smells, awkwardness, and cellar damp. I think it's for others to say how good Norwegian Lady were, if they're interested, though I will say that we wrote the best song about self-amputation that I've ever heard. I'm still in touch with Dave Carbone, and occasionally run into the other Lady-boys."

The Rebel: How broke are you?
"The wolf is never far from the door and at moment he's a bit close for comfort. Money is like soap in the bath for me. As soon as I get fed up, stop chasing, lie back and relax it seems to settle within easy reach. Then it slips away and I start chasing again, only to get fed up, stop, etc.."

The Rebel: What gets you out of bed in the morning?
"Thirst, strong sunlight, fear of aging, the prospect of a good coffee, grandiose thoughts of striving for a better world, bladder, sometimes even the wolf."
Posted by The Rebel Magazine at 10:21