Q & A with Eva Masterman 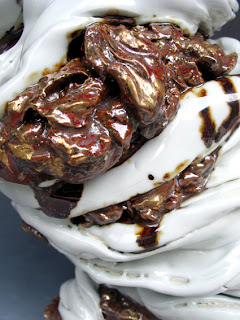 (Above: "The Shape Of Things" detail, 2009)
The Rebel: When did you first start working with clay? What are the best and worst aspects of using clay?
Eva: “I first started seriously working in clay in my second year at university, so about Christmas 2007.  I find the best aspects of clay are also its worst:  what draws me to it is the unpredictability and the way it can seem to have a life of its own.  I use it in a way that allows the material to lead the form, trying to work with the faults and ‘mistakes’ that happen during making.  Unexpected things can happen when a piece is fired.  If you get complacent or leave it for too long whilst building large structures, the form will collapse or crack.  This can be unbelievably frustrating: several times I’ve been very close to completion, left a piece overnight, and returned to rubble.  However, usually, this goes on to inform the piece and betters it.”
On your c.v it says you worked for a while at White Cube. Did you used to day dream about having your work shown there? Are there any artists represented by white cube that you respect much?
“Of course I daydreamed about having my work there!  Who doesn’t?  The reason I originally decided to apply there was actually because they had Rachel Kneebone on their books:  she makes beautifully intricate, white porcelain, figurine-type things, I just love them.  I thought perhaps if I worked where she showed she might decide she MUST have me as an assistant.  As it happened I could only handle a month or so of invigilating there so never actually met her.” 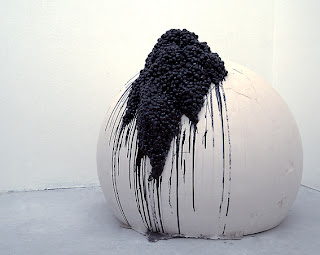 (Above: "Darkness Rising" 2008)
You curated a show called Sex, Art & Videotape. Did you enjoy the experience? Often people say curating is a thankless task or more trouble than it’s worth?
“I’ve curated a few other shows since then too:  I really enjoy it.  In my own work I’m pretty solitary, on my own in my studio, so it’s brilliant to have a chance to interact and organise other artists and involve myself in the more practical side of the art world.  I’ve exhibited my own work in every show I’ve curated so perhaps I’ve had an ulterior motive to having control over what goes where, but making a whole, cohesive experience for the viewer out of disparate parts has always been a very satisfying exercise for me.  It’s fair enough that lots of people don’t like it but as thankless or as hassle-full as it might be, it’s an integral part of any show and someone has to do it!” 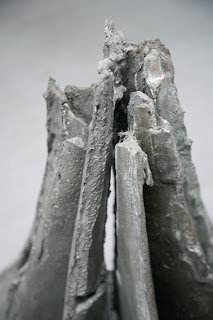 (Above: "We're Family" detail.)
What are you currently working on and how is it going?
“I’m currently working on a large, fluted structure, something like a trumpet head, out of Jesmonite.  Eventually there will be 2 of them, one hanging over the top of the other.  It’s too early to tell how it’s going, but considering it’s for a show in less than 2 weeks you’ll be able to tell for yourself pretty soon!”
What's the story behind your piece, "Stump - what good are you to me?"
“It was my first successful piece in clay and to do with issues I had at the time about my sexuality.  To be blunt, it was based on a shrivelled penis I saw at the Huntarian Museum…take from that what you will.” 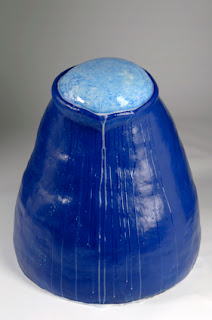 (from 2008)
Are most of the artists that have had a big impact on you male or female?
“On a physical level, the ones that make my spine tingle tend to be male:  the sheer scale and simplicity of form of pieces by Anish Kapoor, Richard Serra and David Nash overwhelm and inspire me.  However, the pieces that I really connect with and stay with me on an emotional level (which, for me, is the whole point of making art – to really connect and communicate to others a personal feeling, so that through that communication, it becomes something universal and bigger than yourself) are always women.  I guess simply because I am a woman.”
What was the last great show you saw?
“David Nash, Yorkshire sculpture park”
Where I live is freezing. How warm is your home and studio?
“Well I live in my studio at the moment so both are bloody freezing!  I can see my breath as I type.” 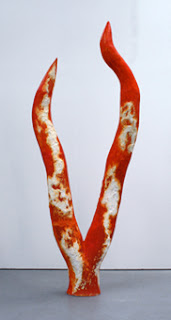 (Above: "The Marks You Left" 2009")
Do you agree with Oscar Wilde that "All art is quite useless"?
“I suppose it depends whether you take it literally or not.  It’s true that the majority, if not all, art has no ‘practical’ use: it can’t be used to fry an egg or fix a car, but then I don’t think it’s meant for practical use.  Art has always been a major aspect of our society and an integral form of communication and expression.  It can be cathartic and empowering both on a personal and a political level, so in that sense I would say that it has a very important ‘use’ (though I wouldn’t say that ‘all’ art is completely ‘useful’ in this sense either – there’s a lot of tosh out there!).”
( Eva and 34 other artists are featured in a group show called 'FREAKS' at Shoreditch Town Hall Basement Which runs from the 9th until the 16th of December.)
Posted by The Rebel Magazine at 05:08