Q & A with Young Rebel Set

Described in the NME as suppliers of "Life-affirming graft rock” , 7 piece band Young Rebel Set are currently working on their debut album. 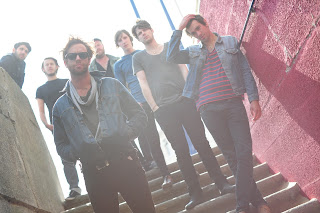 (Photo above by Lawrence Watson)
The Rebel: Can you tell me a little bit about Stockton-on-Tees. If I was to spend a weekend there which parts of your home town would you recommend I visit?
"Stockton's a large market town in the heart of the North-east of England. There's nothing really much to see or do, unless you like pound-shops or awkward pubs."
Did you grow up with a lot of music in the house, books on the shelf and art on the walls?
"The majority of us in the band all grew up with a definite love for music with guitars or pianos sitting there, wanting to be played at any given moment."
What was the first song you ever completed and what was the name of the most recent song you’ve composed?
"As a collective, the first song we came up with together is a song called 'Common Touch' and the most recent song we've all sat down and wrote as a group is 'Overworked and Underpaid' - a self explanatory stab at working life in general."
Do you own an iPod and do you think the iPod changes our relationship to music?
"The iPod has definitely changed peoples relationship to music as, when we were growing up it was all about casettes or CD's - to actually have the physical form of music and hold in your hands. Nowadays, music is just little snippets of information flying around as mp3's. There's no physicality involved anymore."
What goes through your head when you're on stage in front of a large crowd? Do you try and single out happy poepe having a good time?
"I think because there's so many of us in the band we always have fun when we're playing live and i think that rubs off on the crowd. So it's good to see people having a good time. The one's who don't like it, shouldn't bother coming."
What are you strengths as a band? Do you have a secret weapon?
"Sheer volume of band members is always a positive in many-a-situation, as there's always someone there who you can turn to at any given opportunity. If i told you what our secret weapon was, it wouldn't be a secret anymore!!"
Journalists have compaired you to The Clash – What is your favourite Strummer & Jones track?
"It's got to be 'Spanish Bombs' hasn't it? What a melody! The hook is amazing and the rawness of the delivery is fantastic."
Who picked your band’s name? What were you nearly called?
"I'm not even going to bother letting you know what awful names we came up with, you can see how bad we are at those type of things by the fact we picked Young Rebel Set as the best."
What do you want the band to achieve in 2011?
"We're really looking forward to releasing the debut album early next year and seeing how people respond to it. We're also looking forward to a lot more widespread touring as well as concentrating on writing more songs."
What’s the best song you’ve written so far? What would you like to be judged on?
"Our best song is for other people to decide. It's obviously subjective to opinion and taste as well. I suppose we'd like to be judged solely on our song-writing but that very rarely happens so we'll just have to wait and see what the pre-mortem obituaries read." 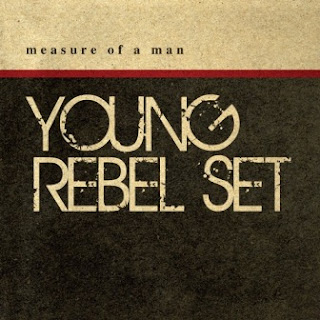 Posted by The Rebel Magazine at 14:48