Q & A with Edward Todd 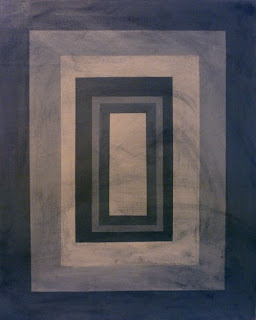 (Image above: "Paraletic Feedback" painted by Edward Todd)
The Rebel: Tell us a bit about yourself - where were you born, which art schools did you go to, are any of your relatives in prison etc.
Edward Todd: "Born in Brighton, grew up a little down the coast in Newhaven. It's alright down there. I came to London about seven years ago, and finished the painting course at the Royal College in 2009. Since then I've been mostly concentrating on my studio practice but also taking stock a bit, re-appraising my work and what it's doing." 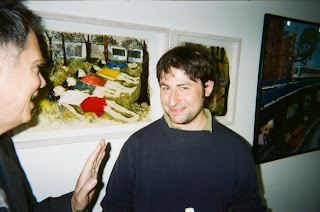 (Image above: Edward Todd attends a private view at The Sartorial Gallery in Kings Cross)

Do you get disillusioned by the art world or "London art scene"? Have you ever been to a private view and felt like smashing up the work or going home and killing yourself?
"Not really. If you aspire towards something that resembles a 'career' then being an artist can be a pretty depressing business, especially when others around you are getting recognition and you're not. It's easy to go to some shows and think 'that's totally vacuous, and some rich know-nothing has spunked money all over it while I'm left eating tesco-value peanuts and drinking £3 bottles of wine...' - but I think that's the wrong way to look at it. There are people with certain tastes that will gravitate towards a certain sort of art, it's really got nothing to do with me, and the great thing about London is that the art scene is big enough to accommodate a lot of different types of practices. That's not to say I don't get frustrated and disillusioned, I do, but mostly with myself, and often with 'art' in general, but I don't blame the London art scene, which is the best in the world in my opinion, and there is some amazing stuff being produced, and great people involved in it."

You put together an exhibition of art by security guards which got mentioned on the news. Will you be doing that again? Did you enjoy being on the news?
"I don't think so, it was fun at the time, but I don't want to repeat it. I didn't really like being on the news, I hid at the back and let one of the artists do all the talking."

What do you think of John Ryan http://en.wikipedia.org/wiki/John_Ryan_(cartoonist)Do you look down on him for being a cartoonist and look up to Peter Doig and Chris Ofili because they are painters? Or do you think Ryan is much better than those two?
"The complex layering, the subtle use of colour, and the profound political message, all mean that I would rate Captain Pugwash above those two." 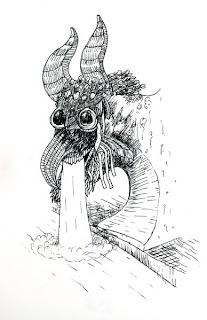 I like your abstract painting. How long did it take to do, how much love went into it and why is it called Paralytic Feedback?
"Painting the concentric rectangles took a day or two, then I stared at it for a week, then I smeared black oil paint on it. Eh, that sounds a bit .... anyway. I dunno about love, but I thought about it a lot and gave it the title because it describes a relationship with modernist abstraction which is in some way incapacitating, or represents a dead end. I don't know if that makes sense- it's kind of a piss take of what loads of artists are doing right now, but not entirely."

Why did you paint a house?
"I like to paint objects which are not only familiar, but also familiar as motifs. It lets me play about with the way the symbolic (the short hand) combines with the particular."

Do you like the idea of painting from life models? Would you like to have people posing for you in your house?
"I'm not very good at people."

Are there any books/film/records that had a big impact on you and that you hold dear?
"I love the George Orwell novel Coming up for air, it appeals to the miserable old man in me, but it's also a wonderful analysis of how we relate to a changing environment. I've probably watched the (disowned) David Lynch film Dune about a hundred times, there is something there that makes me come back to it, and I think it relates to my painting in some way."

If you could have any super power what would it be?
"I would love the ability to rewind time, because there is so much in my life that I should have done better."

What is your next painting or project going to be?
"I'm doing a version of a Turner painting, I'm not entirely sure where I'm going with it but there is something about making a doomed attempt at replicating one of the greatest painters in British history that appeals to me. I think it's to do with the learning process, about taking on something outside my range. Some of my favourite artists are like this; those where you can really see them struggling to adopt ideas and techniques which are foreign to them, and which they are not entirely comfortable with - a lot of the Camden town group for example, not so much Sickert, but lesser figures like Charles Ginner and William Ratcliff were really trying to take on board the avant-guard stuff from Paris at the time, but couldn't fully escape from their traditional English sensibilities. I don't know, I just like it, I'm hoping that I'll work out why exactly as I go along. I've got a few other things on the boil as well, some sculptural objects with fish, and for a while now I've been trying to complete an essay which describes art as a product of boredom." 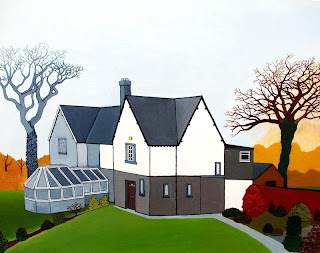