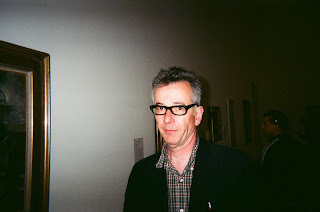 I've been a fan of John Hegley for years. A while back I got him to come to Tate Modern and give a talk about George Braque. 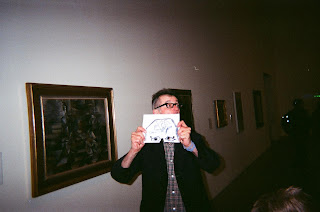 My dad blew winter
from his hands. He would cup them
and bring warmth in.

Underneath his hat the Frenchman keeps a pie. Why?
this way twill stay hot 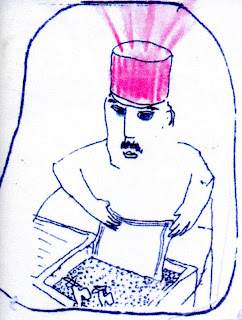 Mr Hegley asked me to spread the news that: Artist Pam Brabants (who coloured in the drawing above) runs a Haiku site. Like him she is a Luton enthusiast..both the town and the team
"The drawing is of Monsieur Robinet. He is to be found adventuring further in a small book I have published with Donut Press. The other two haiku are for a show concerning family and animals which I hope to do in Edinbugh and Peebles and elsewhere."
Visit Pam's site: http://www.freewebs.com/pamelabrabants/
(Below: A feature on John taken from the lad's mag Loaded) 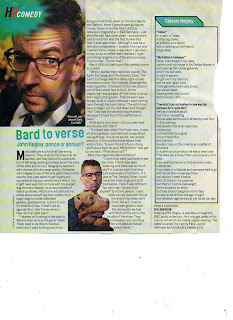 John told Phil Robinson from Loaded that he started off busking in the tube in Westminster outside the gents' toilet... "There used to be this horrendous smell and I used to bring joss sticks along and set them down on the floor beside me. Before I knew it people were giving me money. Sometime after that I did this television programme in East Germany - just after the wall came down - and someone said to me that I was the first busker they had ever seen there. Although it was for a television programme I busked it for real and I earned some money. It was when I decided to buy a cup of coffee that I realised I'd got something tangiable out of the whole process. It felt so real. This is for that."
John goes on to talk about the early days of the Comedy Store...
"At the beginning I was gonged off 5 times in a row. But I kept coming back. That showed I was hungry to do it, mainly because I kept coming back through the humiliation. The sixth time I was on stage I put my foot down and said "No!" That was the transforming moment, because it's hard to pull the performance back." 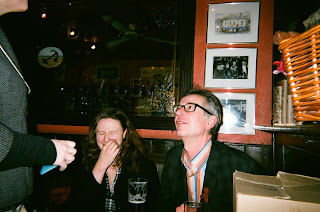 Posted by The Rebel Magazine at 02:31