I've probably heard Message To You Rudy by The Specials featuring Dick Cuthell and Rico a few thousand times by now but it still never fails to make me happy. Their version of the Dandy Livingstone ska track has been used in ads for Sainsbury's, Pizza Hut and most recently Next. It's a lovely idea to think that Dick and Rico got some money from those ads but I wouldn't be surprised if they didn't. I read in Lucy O’ Brien’s biography of Annie Lennox how (post Ghost Town)Dick Cuthell played on Lennox’s two breakthrough albums Sweet Dreams and Touch as well as the hit single Right By Your Side. O’Brien describes how the band are getting more and more successful and selling out bigger and bigger venues. When the band play New York legends such as Robbie Robertson drop by to say Hi and everything sounds great but then…
“As they became bigger, Dave and Annie’s experiment of keeping themselves as the Eurythmics’ commanding nucleus with a changing line-up of musicians was resolutely put into effect. Although it gave Dave and Annie greater versatility, their musicians received some pretty offhand treatment. Just before the Touch tour began its European leg, drummer Pete Phipps, keyboardist Vic Martin and Dick Cuthell were sacked and replaced. ‘I was told they couldn’t afford me,’ Cuthell said at the time. ‘It really is a blow. I feel upset that they left it so long to tell us while secretly rehearsing new guys.’
With his wife expecting a second child, he was worried about the immediate financial future: ‘I’d already cancelled work because I thought my time would be taken up with Dave and Annie.’
Although Dick's talents were sought out by bands such as Amazulu, The Pogues and XTC for most of what was left of the 80s he collaborated with Jerry Dammers on singles like Nelson Mandela, Racist Friend, Starvation and The Wind of Change - all of which have a place in my heart. When Madness first split up four of the original Nutty Boys (Suggs, Chas, Lee and Chris) put out a record under the title The Madness. Dammers and Cuthell both played on that album and I hear it's about to be re-released on CD with bonus tracks. 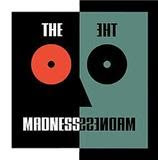 On thursday the 28th of Oct last year I was lucky enough to see Dick appear as a special guest of Rico & His Band at Gaz's Rockin Blues in Soho. Their performance was brilliant. It was such a thrill to see them onstage together again. And, just before they came onstage the DJ played a new track they they've been working on.
Because old stuff is being made available and new stuff is on it's way I've decided to dig out a transcript of a telephone conversation I had with Dick Cuthell around the time of The Pogues album Rum, Sodomy & The Lash. I was only 12 years old when I did this interview which might explain why my questions are even sillier than usual. What you're about to read appeared in issue 2 of The Rebel which I sold to my friends at school in 1985. I found Dick's number in the phone book. When he answered my question I would repeat his answer to my sister who kindly wrote it down for me. One of the questions was about his musical heroes. Dick rattled off a huge list of names the only two that rang any bells at all were Miles Davies and Louis Armstrong. I hope we get to read a decent in depth interview with Mr Cuthell one day soon.

The Rebel: Are you still in contact with ex Specials like Terry Hall?
Dick Cuthell: "Um... well I haven't seen him for ages. Not since the Fun Boy Three Days. But I'm still friends with Neville."

Do you like The Colourfield?
"Well, Terry sent me their album but I haven't heard much of them yet apart from Thinking Of You which I quite liked. I get sent so much stuff that I just don't get the chance to listen to it all."

Tell us a secret about Jerry Dammers.
"I can't think of anything."

He doesn't have front teeth. Does that mean he eats lots of soup?
"Er... I've never seen him eat soup. When we're in the studio I've seen him drinks a lot of lucazade"

Do you brush your moustache everyday?
"(Laughs) When vanity takes me over I do brush it. I've been told it reflects my moods. When I get upset it goes strange round the edges and sometimes when I get angry I pluck it."

What are your favourite charcaters in Eastenders and Brookside?
"In Eastenders it's Lofty. And in Brookside I suppose it has to be Harry." 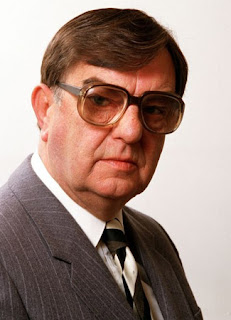 (Above: Harry Cross from Brookie played by the late Bill Dean http://www.brooksidesoapbox.co.uk/page13.htm)


Of all the songs you've played on which are you most proud of?
"I think Rudy. A Message To You Rudy has very happy memories attached to it."
Cut and paste this link into google: http://ricorodriguez.wikia.com/wiki/Dick_Cuthell
and you'll find Dick's full disography and more info 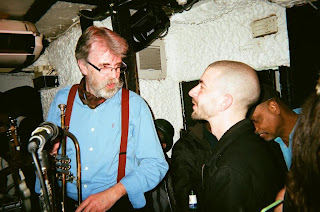 Below is a photo of Gordon Beswick blow drying a collaborative painting we made of Dick and Rico playing Jungle music: 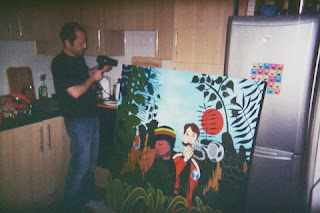 Posted by The Rebel Magazine at 12:04