Q & A with Julian Wakeling 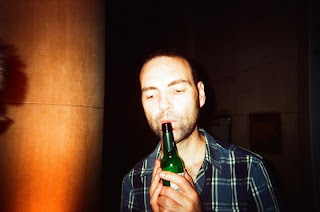 The Rebel: You were really into sending out postcard art a while back. Do you ever miss posting out your work to people?

Julian Wakeling: “Strangely no though I did like doing it at the time. I enjoyed some of the cards a lot but after they were posted there didn’t seem to be so much there for me, whereas with photographs I love them even if no one else ever sees them. I guess the postcards were as much about the people receiving them and their reactions when they picked them up off the mat. I’d like to have been there really, or been them. Anyway, I think I also felt I’d said everything I could by the end and I was in danger of repeating myself.”

“It’s become very familiar but I love it when the sun comes out. It’s practical though. They’re the nearest areas to me: Soho, Fitzrovia, Covent Garden. I used do Bloomsbury too but I don’t so much now. Those areas are among the best for my kind of photography as well. There are lots of windows with lots happening. Some days I get tired of the same streets but occasionally there’s a kind of magic going on and they don’t seem like the same streets anymore.” 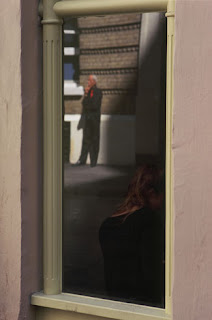 3) Do you see marks of weariness and woe in the most of the faces you see in Soho?

"I don’t know really. I don’t think I can be very observant. Or at least I’m looking for particular things, particular effects and anything else is peripheral. I like having people in my photos but really I use them as motifs and I don’t like them to be too clear. They’ve got to give up their individuality for the sake of the overall design. I catch myself looking pretty weary sometimes though."

4) What kind of camera do you use?

“I’ve got a few but mostly I use a Nikon FE film SLR. They made them in the late 70s/early 80s. It’s a lovely camera. It’s compact and feels well engineered. Old film cameras are so much easier to use and understand than digital ones I find. So few controls. I like to keep things simple.” 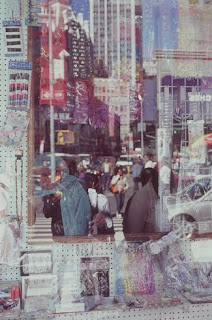 5) Facebook is great for getting responses to photos but do you worry about copyright issues?

“I don’t really. Maybe I’m naive, I don’t know. I do worry about this digital age of photography in some ways though, the devaluing of images through the ease with which they can be created and in such numbers. I use film because I don’t want the ability to take unlimited shots, which would devalue them for me. Also I don’t want to delete anything. And I like having the transparency, the physical original. But maybe I’m just a Luddite and people had the same fears when Kodachrome first came out, or the Box Brownie.”

6) Do photos steal people souls and does your camera ever lie?

“I suppose it’s true that you take something when you include someone in your picture, but to say soul would be getting a bit metaphysical. It’s almost like they’re actors without knowing it. I think people look rather beautiful in my pictures quite often. And it’s a fiction that’s created so there’s no lying. My camera can’t lie because it doesn’t set out to tell the truth.” 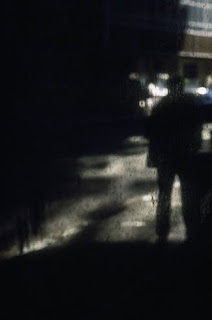 7) Did you enjoy taking photos as a child?

“Yes I did. Mostly pretty forgettable ones but one evening when I was about 10 I was out with my dad and there was the most beautiful sunset. I took a picture of it and I was so excited because it seemed like it might be the best picture ever taken. Unfortunately I managed to fog the film because I didn’t rewind it properly and then opened the camera and the picture was lost. I still think about that shot and the feeling I had at the time. The one that got away.”

8) What is your idea of beauty in nature?

"That’s difficult because to find nature you usually have to get in a car and when you’re there you’ve got civilisation in your head so it’s impossible to experience in a true way, if there is such a thing. There’s a remembered paradise lost of childhood experience of nature. I wish I could have that innocence back. I kind of feel that I wouldn’t want to have me in a natural setting now. I’d only spoil it with my thoughts. Having said that, I once walked through the Horniman Gardens in Forest Hill on a summer’s day and I thought it was utterly beautiful, like the Garden of Eden. But that’s a park, does that count as nature?"

9) What is your idea of beauty in art?

"Do you mean fine art? I’m quite old-fashioned. A lot of modern things seem gimmicky and attention-seeking to me and rather shallow. The National Gallery is full of beautiful stuff. Tate Britain has some great things too, like Stanley Spencer’s Zacharias and Elizabeth. Such a great feeling of place to that picture. I like paint. I think it’s really exciting when a brushstroke can describe something and still be recognisably a brushstroke. I try and get a similar effect in my photos sometimes by using a reflection in a window that has a textured surface behind it, so the two merge." 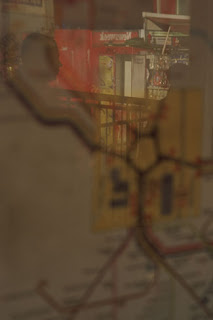 10) If you were Mayor of London would you make everyone buy your photos?

"I think being the Mayor of London and thus well known would make it very difficult for me to be unobtrusive on the street. I have a hard enough time as it is. I might have to stop altogether. So maybe I would make everyone buy my pictures. It would be the least they could do to compensate me."

11) Is your work a bit pretentious?

"I’m finding it hard to think of a photograph that is pretentious to be honest. I’m not certain it’s possible. I’m sure I could make absurd claims for them but that would be me being pretentious, not the pictures."

12) Do you think you're getting better as a photographer?

"I’m kind of banking on it. I’m getting more selective certainly so I think I take fewer bad ones. But good ones often seem to come from nowhere and it’s hard to tell afterwards what you did right. You can never predict them. I used to take lots of pictures and get good ones that way eventually. That was when I did digital. It didn’t seem satisfying though and it was hard to tell if I was improving. You could argue it’s all about results but I like the process too and that’s getting better now that I use film. It feels like a more significant activity than it did. But it’s still a case of fail again, fail better most of the time, to quote Beckett."

13) Are you scared of the darkroom?

"Not at all. When I was at college the darkroom was the best place to be. It was in the basement and was so peaceful and quiet. I don’t have a darkroom now because I shoot colour slides but in a way you have to have a kind of cool darkroom mentality at all times when you’re photographing, even in the maelstrom of the street. Your head has to be your darkroom."

"It would be pretty poor if it was a science as nothing is learnt and nothing can be proved or predicted. So no. There’s a philosophical side to what I do though if you like. I’m interested in thinking about time and memory, which are big parts of being. You inevitably come across this if you photograph like I do. But it’s not systematic and I don’t really come to any conclusions. Anyway the images are the main thing."

15) Who are your favourite photographers?

"That would depend on my mood but if I had to choose one photography book to take with me to a desert island I might go for one of postcard photography by the John Hinde Studio photographers, including John Hinde himself and others whose names I can’t remember sadly. Anyway, they did photographs for postcards sold at Butlins holiday camps in the 1960s and 70s, as well as other holiday locations. The Butlins ones are especially beautiful and feature real people in often quite strange and fascinating posed scenes. They weren’t meant to be art, which is why they’re so good."

16) What was the best photo you ever took in New York?

"Hard to choose. There’d be a handful of contenders. There’s one I really like of reflections in the side of an ambulance in Canal Street, which is a very busy street downtown full of shops selling cheap jewellery. A woman had blood coming from her head and there was a big fuss with police and paramedics. I asked a street vendor what had happened. I suppose if I’m honest I wanted it to have been a robbery. But he said she’d just fallen over, rather dismissively. I realised it would be tricky to photograph head on, so to speak, and also not interesting for me anyway but then I saw that the scene was replicated in the ambulance so I went for that. I got the umbrella from the vendor’s stall and the ambulance, that’s all. It’s a very quiet picture with the crowd reflected in a ghostly way like a painting." 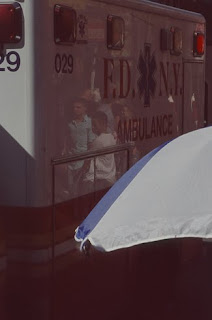 17) Which city would you like to travel to and make work?

"I’d love to go back to New York. Somebody I know from the Midwest of America suggested Chicago as a place to photograph. I love the pictures Ray Metzger has done there, and of course Harry Callahan. I’ve also got a nice book by a photographer called David Robinson and it’s of photographs taken in Rome and Venice in the 1970s, lots of reflections. Makes me want to go to Italy. You see, I don’t have much imagination. I just follow other people."

"There are many but one that stands out is of a woman reflected in a pub window as she walked by one lunchtime in April. The window has that wire reinforcing you get in windows in institutional buildings and this gives the impression that she’s wearing a veil. The light behind her face is actually provided by a notice on an adjacent window that said Toilets for Customers Only. I caught her at just the right moment, when her face passed the sign. Without that it would have been too dark. I just remembered someone beautiful appear in the viewfinder for a second before vanishing. I tried to hang on to the memory till I got the film developed. She didn’t seem to notice me even though I was only a couple of feet away. I pressed the button and luckily the picture came out, unlike the sunset all those years ago." 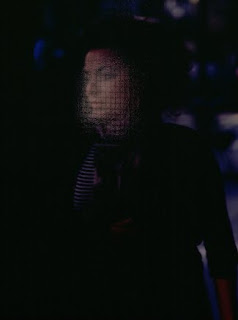 Posted by The Rebel Magazine at 10:22