Q & A with Sean O'Connor

Sean O'Connor is a great painter. He also collaborates with Rob Dennis on videos that have been screened in venues across London including Hoxton hall, Crimes Town, and Tate Britain. 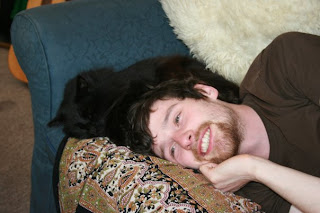 The Rebel: What is the Sean O'Connor story?
Sean O'Connor:"I was born on a Friday morning 33 years ago in Wrexham infirmary, just next to the Wrexham lager brewery that sadly is no more. My first memory was the smell of hops drifting into the delivery room. I am the only child to local girl Babs and Yorkshire man Mick. I am considered to be their pride and joy. Before I went to study painting at the local college (which was situated in both the morgue of the old hospital and a panel beaters garage), I dreamt of a steady football career playing for my beloved Wrexham F.C. It is well known that as a footbal club they are not very good, so I thought that it would be easy to play for them. However, when I started to play for the school team I realised that football is quite hard, well it was for me anyway, so I gave it up rather sharpish. I have now realised that art is an equally hard venture to master or at least to make something good that others appreciate just a bit. I hope to rectify this and try harder next year. Since Wrexham I have lived in Coventry, London and now Stockholm, where I live with my lovely girlfriend Sanna, my 6 month old son Dag, and our 11 year old cat Duster."
The Rebel: Do you wish it could be Christmas everyday?
Sean: "We will be staying with Mum and Dad in Wrexham. Me, Sanna and Dag will be sleeping in their bed and Mum and Dad are sleeping in my old room, with Dad on a blow up mattress. Dad got rid of all our Christmas decorations a few years back, but Mum tries to make it festive by sticking all her Christmas cards up around the house. She receives about 200, she is very popular in the North Wales area. No, I don't wish it was Christmas every day, maybe Easter every day would be better." 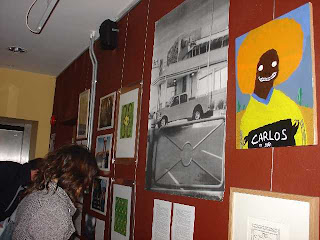 (Above: On the far right you can see Sean's painting of Carlos the footballer. The name of the exhibition was Night on Earth and it took place at The Oh Art Gallery at Bethnal Green's Oxford House.)

The Rebel: Do you think paying for art education is wrong? Was your education worth getting into debt for?
Sean: "I have been in debt for a long time now, and it is starting to get a little irritating. I have spent a lot on art education and sometimes I doubt my decision to embark on the treacherous journey. But, my art college days will probably go down in the O'Connor history books as the fondest of memories. It's a shame that it is becoming more and more expensive to study but I don't think it will put budding artists off the idea, student debt will always feel like monopoly money, well until you get a kid and have to apply for a mortgage! I think free art education could be a little chaotic and too bohemian, it might get messy."
The Rebel: What art things did you get up to in 2011? What were the highlights?
Sean: "Sadly there where not that many art highlghts, I had an MA show which was ok, I ran a bar in my space and showed some clips from Boy's from the Black Stuff. The cultural divide was evident immediately. The main highlight of 2011 has to be the birth of my son Dag in June. I love him to bits and I am really enjoying being his Dad. I just hope I am better at parenting than football, I think I might be.He looks exactly like his mum did when she was a baby, and he's blonde! He is the first blonde O'Connor in O'Connor history!"
The Rebel: What do you want to happen in 2012?
Sean: "Well, we are moving to a small cottage in the Swedish countryside it has a barn that I will start to paint in. I haven't painted in years so I am really excited about this. However it is situated next to an old slaughterhouse and mink farm, so I won't be able to spend late nights in there as I will probably get scared. It also has a river running through it so I will do a lot of fishing, which I love." 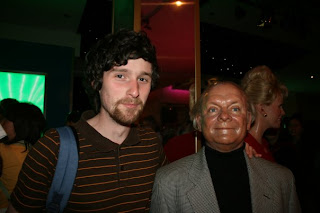 The Rebel: Do you miss being in London?
Sean: "Sometimes. I miss my friends more than London itself. I also miss the Hermits Cave in Camberwell. Next time I'm back I have to go there and hopefully bump into the scallywag that stole my favourite suede jacket on my leaving do." 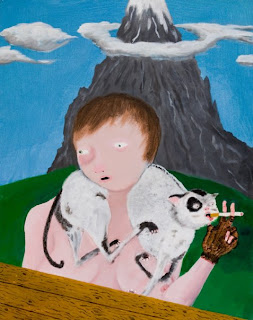 (Above: Sean's painting of his Mother)
The Rebel:What's your mum like?
Sean: "Mum is lovely, others realise this too and it is apparent when you walk down the Wrexham high street with her. It takes about an hour to get from Boots to Poundstretcher, which aren't that far apart."
The Rebel: Name a few tracks that would definately be included if you were to compile me an old school 90 minute compilation tape of music you like?
Sean: "Unfortunately I have to include Hush by Kula Shaker because it came on the radio just after me and my friends had a small car crash and when it kicked in I realised I was still alive, it was a nice feeling. Tell Me When My Light Turns Green By Dexy's. Stay Up Late, Talking Heads. Killing Moon, Bunnymen. Dancing in the Moonlight, Thin Lizzy not Toploader. There is a light...Smiths. Under my Thumb, Stones. Hangin'Round, Lou Reed. Go Your Own Way, Fleetwood Mac."
The Rebel: Tell me an artist that you think is over looked. I just want their name so I can google it.
Sean: "Oskar Korsár."
Posted by The Rebel Magazine at 05:05