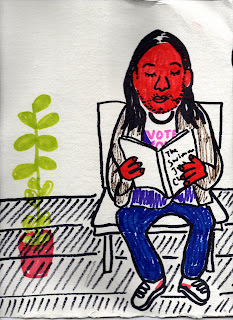 Niven Govinden is a writer. His novels include We Are The New Romantics and Graffiti My Soul
. Last week he was on radio 3 reading out a new story and he was also hit at the recent Stoke Newington Literary Festival:
http://www.newstatesman.com/blogs/cultural-capital/2011/06/stoke-newington-festival.
But the reason I know about him is because of the auction to help the brilliant radio station Resonance FM that took place on March the 20th. There were all sorts of prizes on offer including trips to Nepal and Cyprus, collectable prints by the cartoonist Glen Baxter, Lessons in how to play the bass guitar from John Paul Jones of Led Zep. Some people made bids for those things others made bids for things like The Tatler magazine to photograph their party or for a signed Rod Stewart record. Niven was the lucky winner of a portrait painted by Team Beswick and Pye!
We met when he came down to Gordon Beswick's studio in Old Street and we talked a bit about what writers and painters he liked. Gordon and I decided to do two portraits. The idea being that Niven could pick which one he wanted and the other could feature in an exhibition taking place at Jasper Joffe's new Shoreditch gallery in late July. 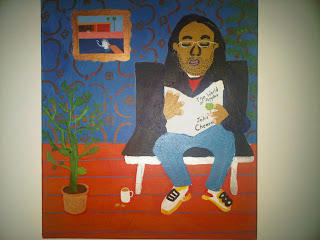 At the top of the page is a drawing I did with felt tip pens. Directly above is the Team Beswick & Pye masterpiece that Niven walked away with. He took the photo using the camera on his mobile. We've got some other snaps of him and the paintings which i'll upload later. Gordon and I are always happy to support Resonance FM - long may they continue! 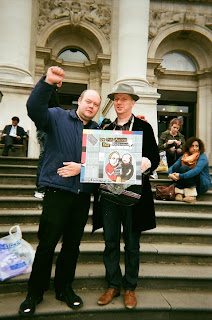 (Above: Me on the steps of the Tate with Resonance FM host Bob & Roberta Smith and a Beswick & Pye painting that featured in the Frieze art fair)
(Below: Gordon Beswick hard at work in his Old St studio) 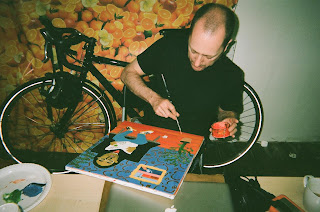 Below: Niven and me looking at both paintings. 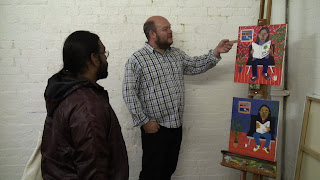 Below: Niven makes his choice. 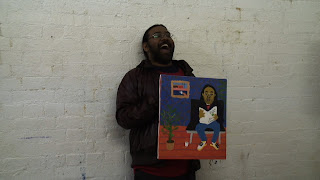 Below: Niven in Red. 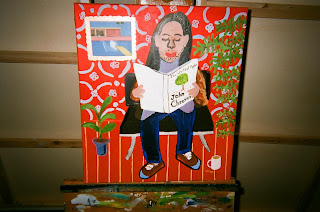 Posted by The Rebel Magazine at 12:20