Q & A with Andrew Petrie

You can find out all you need to know about musician and writer Andrew Petrie by visiting his splendid new website: Bad News Immediately 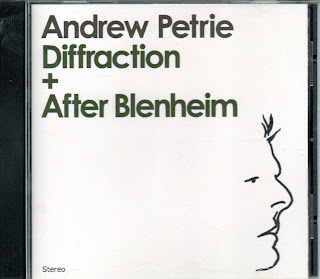 Andrew recently agreed to answer a few questions for me...

1) Were there lots of musical instruments in the house you grew up in? Who inspired you to learn the guitar and piano?

"Only one musical instrument: the piano my mum bought me in 1979. I didn’t need inspiring because between the ages of six and eight I shared my bedroom with it. You couldn’t keep me away. I first picked up a guitar in 1985 and like thousands of 12-year-old boys before me (and since) I was inspired to learn by the Beatles. Boring but true."

2) Which contemporary musicians do you rate and why?

3) Why did you decide to start your website? How’s it going?

"I started the website because I finally had enough bits and pieces to share - photos, films, music. It’s going well so far, though some visitors haven’t got their heads around the concept of updates."

4) Which famous people’s deaths upset you? Did you shed a tear when Captain Beefheart passed away, for example?

"I was sadder when Billy Mackenzie died in 1997. The Captain was obviously a great loss, but we’d had a while to get used to the idea of him not creating anymore. My immediate response was to play The Past Sure Is Tense at top volume." 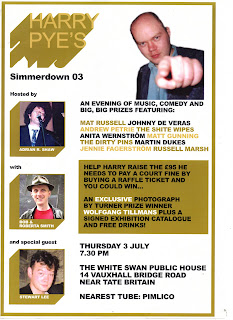 5) What are your memories of the Simmerdown night at The White Swan in Pimlico?

"Bob and Roberta Smith abusing my electric piano. Swedish girls performing a song using two pine cones on a ribbon as a percussion instrument. Some bloke doing bird whistles while playing Blackbird on the guitar, then refusing to give me a lift with the aforementioned electric piano even though he had a van, meaning I had to take it home on the bus."

6) Was it a better or worse night for you than the Forest Fire sessions in Coldharbour Lane?

"Better, as shortly before taking the stage at the Sun & Doves I’d been informed that an old girlfriend had killed herself." 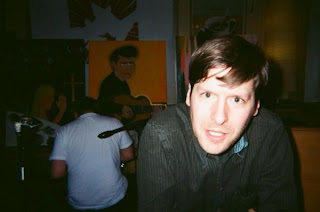 (Image above: Andrew taking a break from performing at The Sun & Doves in South London)

7) Does life seem good at the moment or are you a bitter man?

"I’m quite bitter, but that isn’t stopping me from enjoying life."

8) Do you have a hungry heart?

"This had better not be a Bruce Springsteen question."

9) Do you think you’ll always live in London?

"As long as the work’s here. I don’t fancy the idea of long commutes with their early starts." 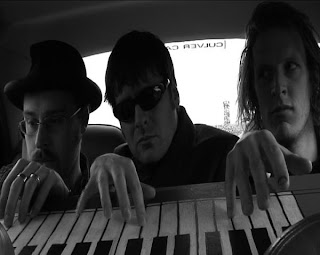 (Above image: Andrew in the video for Trojan Horse by The Values)

10) What’s your favourite film and why?

"A tough question. I’ll say Metropolitan because it’s witty and charming and has a great score. On another day I might have said La science des rêves or Rushmore or The French Connection or All The President’s Men or L’année dernière á Marienbad or Serpico or Far From Heaven or Three Kings or Close Encounters Of The Third Kind or Dog Day Afternoon or Robinson In Space or In The Line Of Fire." 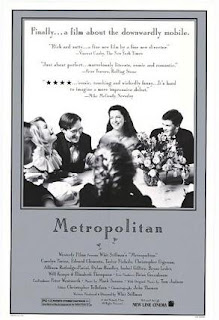 Posted by The Rebel Magazine at 11:33