Q & A with August Kunnapu 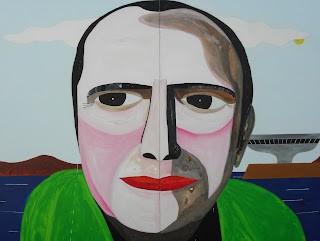 (Above: Painting of the Brazilian architect Oscar Niemeyer by August Kunnapu)

2011 has been a pretty active year for me so far. The highlight is probably a bike ride from mid-Tallinn to Paljassaare peninsula with my nearly 2 years old son Alberto. The wilderness was still there, although the place is getting more civilized.
I was also editing the 14th issue of the timeless magazine Epifanio with the main theme Space around us.
Most of the time I was preparing for the painting show ‘My Favourites’ for Gallery 21 in Riga, Latvia. I was portraying some of my favourite writers (Richard Brautigan, Daniil Harms), filmmakers (Kim Ki-duk, Michelangelo Antonioni), painters (David Hockney, Christian Schad), musicians (Devendra Banhart, Vashti Bunyan, Stuart Staples), architects (Alison Smithson) and sages (Dalai Lama, Amma). Some of them are set in specific surroundings, like the Russian avangard writer Daniil Harms is viewing the Nevski Prospekt from the balcony of the bookshop Dom Knigi in the late 1920ies St. Petersburg. The American writer Richard Brautigan is in harmony with the colourful geometric cityscape, which seems to be part of his inner world.


2) What is your personal favourite painting from the My Favourites show? (Please say why)

Usually when I’m preparing for a show, the very first or the very last painting tends to be the best one (I have noticed a similar phenomenon with film directors – their debut movie or the last movie is the best). In the particular case the last painting is my favourite – portrait of the Brazilian architect Oscar Niemeyer, who is meditating with his UFO-shaped Modern Art Museum at the background. When I’m portraying a person or a house, I always try to paint his/her soul.

3) Do you contact all the people you do portraits of? Do you get good responses and reactions from them or their families?

I haven’t contacted any of the ‘models’ I’m portraying for ‘My Favourites’. Some of them are in another dimension, some of them live quite far away from Estonia.
But I have made quite a lot of commissioned works and usually the people on the paintings and their families love them. The last portrait I did, is a portrait of my client, his old-school BMW and a ship in the background. I just finished it yesterday, so I haven’t felt his reaction yet. 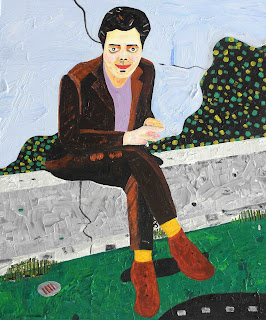 (Above: August's painting of Stuart Staples from Tindersticks)

I feel that I’m getting more skilful, but I hope not too skilful. But the essence remains the same – interest in simple images and bright colours.

5) Most people I know in London have been recession hit or are worried about money. How are things in Tallinn? Are you worried?

I feel that things are getting step by step better in every field in Tallinn. I have talked to several businessmen, architects, artist and gallerists – they all agree with me. 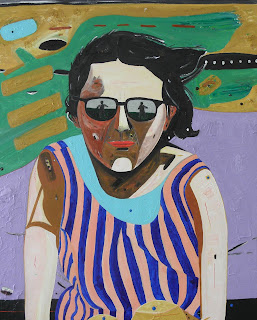 (Above: August's painting of Alison Smithson)

6) Which new artists have impressed you recently? Have you been to any good exhibitions?

I was impressed with the album of the Californian pop artist Wayne Thiebaud at a friend’s place in Riga. He has a good sense of ‘genius loci’ and colour.
For the same reasons I enjoyed the 1970ies paintings of the Estonian artist Ludmilla Siim in our art museum in Tallinn.

7) What do you love most about the life you live?

I like the people and the paradox of a soul being set inside a body.

8) What do you think of Miro? There is a big show of his work on in London at the moment? Were you ever a fan of his work?

I quite liked his show in our art museum in Tallinn. His sketches and watercolors were on display. I also visited the Miro Foundation in Barcelona during the high school time. I like his spontaneity and sense of colour.

9) Is it good that PULP have reformed? What is your favourite Jarvis Cocker song?

Sure it is good. My cousin saw their concert in the Primavera music festival in Barcelona recently – she liked it a lot. I listened to PULP a lot during my teenager years. There are many favourite songs. ‘Dogs are Everywhere’ comes to my mind, although I’m more a cat fan.

10) What was the last film you saw that made you feel either really excited or happy?

‘Howl’ about the famous poem by Allen Ginsberg was pretty exciting.
Posted by The Rebel Magazine at 02:53