David Hockney at the Royal Academy

I kept seeing posters for Hockney's "A Bigger Picture" show whenever I used the escalator on the underground. Every time I looked at it I felt a bit depressed. 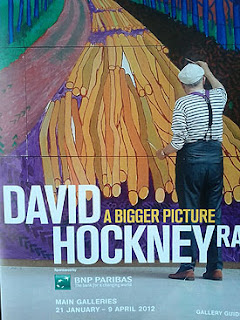 The poster doesn't make me want to see the show. I think it makes Mr Hockney look as though he's painting a terrible backdrop for a low budget panto. At Tate Britain they often display the iconic Bigger Splash painting that helped make Hockney a household name. When you see the actual painting it's a real disappointment, it looks so much better when it's reproduced as a poster or postcard. So often now, whenever you pick up the London Evening Standard there are dull as dishwater rants from Hockney about cigarette smoking in public places. His contributions to the Tate's show of Turner's Watercolours were a bit poor. And there also seems to be an endless stream of less than essential Hockney books flooding the bookshops such as "Dog Days". 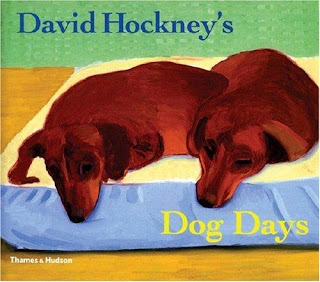 So... I went along to the R.A today with fairly low hopes and I'm glad to say I thought aspects of the exhibition were fantastic and I came away thinking that the show as a whole is definitely worth queuing up in the freezing cold for.
In 1964 Hockney claimed he felt he had to get away from England because he felt it was grey and dreary and, in order to be inspired, he needed to have the space and light you get in California.
All these decades later David Hockney now delights in being able to see the beauty he missed in his youth and says the landscapes in Yorkshire give him a "spatial thrill." He's also a man who loves his iPad...
Hockney: "What's really good about the iPad is it's speed. No other medium using colour is as fast, meaning you can capture quick lighting effects like nothing else. The spring is just spectacular this year, and I am getting it down." 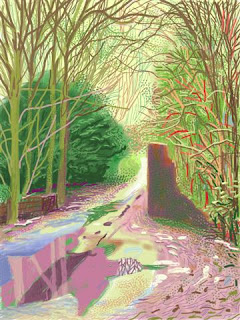 (Above: "Arrival of Spring in Woldgate, East Yorkshire" by Hockney, 2011)
This time round, the paintings - some of which are 6 meters long - have to be seen to be believed and the postcards can't capture their power. 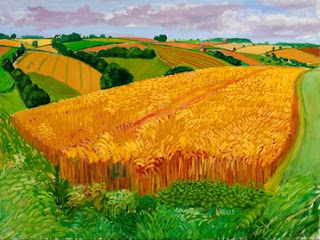