(Please note: This feature was written in January 2009)
Talking about Jesus and Art with Billy Childish and Geraldine Swayne. 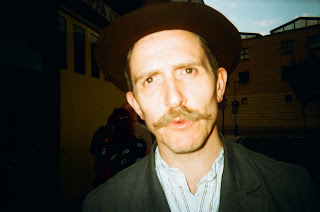 Harry Pye went to Whitstable in Kent and spent the day learning to paint in oils with Billy Childish and Geraldine Swayne. As well as quizzing them about painting, Pye also pressed them to a few questions about Jesus. Now read on… 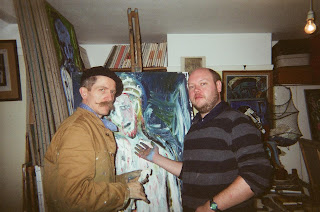 Harry: What do you think happens to you when you die?
Gerry: “Knowing me I will get confused and have to hang around somewhere horrible. I’d like to end up breezing about in a gorge I used to live near, it’s full of ghosts already. Obviously disappearing into “the light” would be preferable though.”
Harry: Do you believe in a heaven and hell?
Billy: “I believe in karma and rebirth. I also believe there must be other realms of consciousness, but not simple heaven or hell options. Many people create their own hell here and now and also try to impose it on others thru ignorance.”

Harry: Jesus taught people to love their enemies and to always forgive – do you have any enemies or people you can’t forgive for what things they once said or did to you? 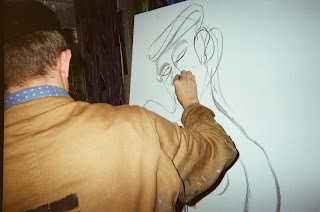 Gerry: “Love my enemies? Only if I really need something off them. Forgive them? I tend to forget them, but one or two remain vivid and awaiting sentence. The real baddies are all dead..hahahahaha.”
Billy: “Forgiveness is an option open to us at all times. Forgiveness may have to be reaffirmed many times. I operate from the wish to forgive. in prayer I forgive all any wrongs I perceive as being done to me and ask for the same forgiveness. Jesus teaching on this matter is the key to a life of meaning and I think it the most radical teaching and action, and the most beautiful.”
Harry: Were you taught about Christianity at School? What  was your introduction to Christianity? Which role did you  play in the school nativity play?
Gerry: “I was brought up a Catholic, so it was there since day-one, along with a proximity to the supernatural which is valuable to me.”
Billy: “I went to a regular infants and secondary school till I was 16. I was never in a play and Christianity was not a big part of our education, thou we had assembly and RE twice a week. I can’t remember the first introduction but I liked Jesus and thought he’d like me.”
Harry: Do you believe that Noah lived to be 950 years old or that Eve was made from Adam’s spare rib or that Jesus was a virgin birth or that there was a massacre of the
innocents?
Gerry: “No. Language isn’t very reliable is it.. I once wrote a letter of condolence a German lady in English. I put it through an online text translator to be polite, which was a terrible mistake. Aramaic scholars seem even less reliable. I’ve been reading a bit about Christoph Luxeuberg recently: very controversial.  Wars happen because of words.” 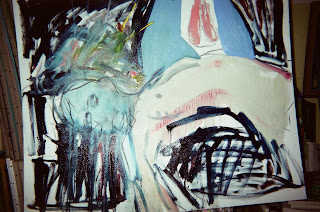 Harry: Has there ever been a time in your life didn’t believe in the existence of a higher power?

Gerry: “I always felt I had my radio on and it was picking when youup the odd bit of unusual static.”
Billy: “Most days, on and off. Faith for me is not a state of being or a comfort zone.”
Harry: Do you see committing adultery as being as big a sin as stealing an old lady's handbag or breaking a child's arm? Jesus believed if you even just thought about sleeping with someone else's partner (but didn't actually do it) you were committing a sin - does that seem a bit harsh to you?
Billy: “I think it’s impossible to generalize about the effects of crime, or grade the harm and unhappiness they mite bring about but personally id say breaking children’s arms sounds very mean spirited. What’s harsh? All action has intention. You could say intension is the father of action. Jesus is mealy pointing out the point of conception in action and trying to help people be happier.”
Harry: Have you ever believed that it's wrong to masturbate or that contraception is wrong or abortion is wrong. By which I mean by doing these things you'll make God unhappy?
Billy: “I don’t consider myself separate from god to make him unhappy. I can make myself unhappy. I think abortion is a very serious matter and raises many questions of how we treat ourselves and each other. masturbation and contraception are small beer.”
Harry: There was a football star called Glen Hoddle who claimed that wheel chair users were unable to walk, run or dance because they had laughed at afflicted people in a  previous life. His belief was that we were put on earth to over come something (like disability) and to learn what it  was like. Can you see a logic to this thinking. And have you  ever thought that you were cursed? (Maybe you laughed at a certain group of people in one of your previous lives?)
Billy: “I think that Mr Hoddle’s views are not expressed in the most sensitive way. I’m sure I’ve done worse than laugh at people in past lives, and had worse done me too.”
Harry: What is the most beautiful god or Jesus inspired artwork that you have ever seen?
Billy: “I like Christ in the Tomb by Holbine, the raising of Lazarus by Rembrant
and the Good Samaritan by Deliciox.”
Gerry: “Some chairs made by The Shakers, hanging off pegs on a wall and Pasolini’s Gospel of St Matthew.”

Posted by The Rebel Magazine at 15:38