Q & A with Ritchie Lamy 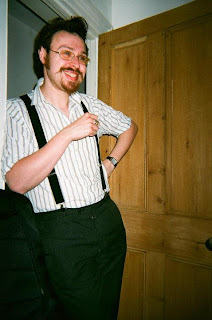 http://www.thelamybrothers.com/
“When we wanted a man with tales of whiskey soaked nights, a gruff voice, a    stomping foot, a banjo and an amplifier to create the atmosphere at 'The Circus Show', we looked no further than to Richard Lamy. His performance shook the building to it's core!”
(Marcus Cope, Co curator of The Circus Show at The Three Colts Gallery). 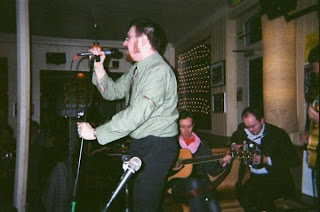 The Rebel Magazine: What was the first record you ever bought and who was the first musician or singer that captured your imagination?
Ritchie Lamy: “The first record I bought was "Heaven is a Place on Earth" by Belinda Carlisle (I was born in 81). I enjoyed the slight growl she does in the pre-chorus. The first band I was into was Kiss. They appealed to the geeky, superhero, trading card impulses of the prepubescent Ritchie- All the fire breathing and comic books- and I alienated myself thoroughly from my peers by aspiring to the Paul Stanley look.”
When did you start learning to play an instrument yourself?
“I started playing bass around the age of fifteen and I soon took up guitar. I've been playing banjo now for nine years (and, boy, are my fingers sore).” 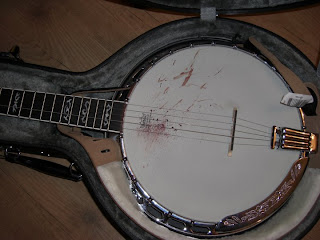 What are your favourite guitar guitarists and solos? Which famous guitarists do you feel are overrated?
“People who appear in the peripheries appeal to me; the guitarists who are organic and rickety. Marc Ribot, Judah Bauer, Smokey Hormel- the types of players that don't appear in magazines. There are guitarists who are certainly overexposed if not overrated. Obviously Hendrix and Clapton have a huge middle of the road following and so shift copy. Of course, those who try their best to emulate the sound of their heroes often miss the point that these people were revolutionary during their lifetimes; that trying to get their tone is a retrograde activity.”
Will the Lamy Bros tour or record again? What are you working on at the moment?
“Currently it is not practical for the Brothers to play together and I am keen become involved in some more varied projects. I am playing solo shows with the banjo, working sporadically with The Values and putting a new band together in the new year.”
What was the best show The Lamy Bros ever played? (www.myspace.com/lamybrothers)
“The best Lamy Brothers shows werre coming toward the end. There was one gig for The Beatroot Rendez-vous where everyone was dancing apart from this one mad bint who kept heckling- that the band were great but I should stop singing and that sorta thing- and sometimes things like that can put a little bit of extra fire into a show.”
What would your idea of success be?
“Well there are different levels of success and each day there are little victories. You play a good gig, you start playing the places where you've seen bands, people you don't know come to see you regularly... having played on the soundtracks for adverts and things is pretty cool. Getting interviewed for the Rebel blogspot must be pretty high up there. Next I hoping for my own sketch show.”
What books are you reading at the moment?
“I like to read different things at the same time to get the systematic rearrangement of the senses that is so popular these days. I've just finished "Paradise Lost", I am reading Derrida's "Writing and Difference", "7 Gothic Stories" by some baroness and various guitar magazines...”
Tell me about your song Mid wife Crisis - what's it like being married to a midwife?
“My wife's a very dedicated community midwife; I'm a very dedicated and uxorious husband. She's on call almost continuously and the calls in the middle of the night can be a pain; also the idea that my wife has seen more ladychuff than me gives an unusual frisson to the relationship. she is, however, amazing at her job and it makes her wonderfully happy.” 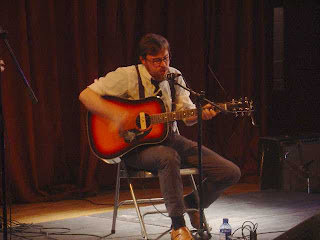 (Photo above by Clare Donoghue of Ritchie supporting Chris Difford at The Oxford House, 2005)

What do you miss about your hometown and what aspects are you pleased to have got away from?
“Jersey is a beautiful place and Nerina Pallot likes to play up the idea that it is some sort of rural paradise but it is also a small place controlled, in many respects, by money. It can be quite frustrating going back to your childhood home. If it has changed then it's disappointing; if it hasn't changed then it's disappointing. I prefer London.”

Do you have a favourite record label?
“There are some record labels that deal with a limited style of music and so you know what you're getting. I like things on Yep Roc or Fat Possum but you can't listen exclusively to one label. Island had a lot of great artists.”
Where do you buy your clothes from and what's the most loved item of clothing you have in your wardrobe?
“I get clothes from many sources including friends and charity shops and high street and vintage shops. I have recently purchased my favourite rockabilly tuxedo from a place in Crystal Palace called Crazy Man Crazy which I recommend highly.” 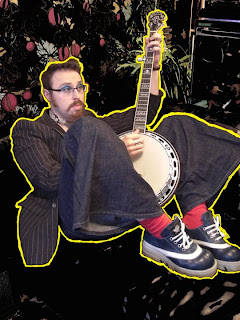 Are you in debt / worried about recessions?
“University fees seem to have created a society naturally in debt. I am not worried though; life continues on and we all keep keeping on”.

Is it fair to say Captain Beefheart is your biggest influence and were you shocked and saddened by his recent death?
“I think that Beefheart's influence is apparent in the music I make. More importantly, all the major bands that I've followed have been fans of Beefheart. He was very ill and so his death was not a shock but he will be deeply missed and warmly remembered.”
Posted by The Rebel Magazine at 14:16