Q & A with The Pheromoans More info about the band and their Christmas show at Ryan's Bar in Stoke Newington here: http://www.myspace.com/pheromoans
The Rebel: Are you excited about your "Xmas office party"?
Russ from The Pheromoans: “We’re playing a Xmas party – it takes place on December the 17th in London. I don’t get out much so I am eagerly awaiting it, as I’m sure the whole of the country is.”
Where does your band go down best and when do you feel unloved?
“Well we have a handful of fans, so we go down well better with them I would have thought. I don’t give much thought to things like this though. People disliking you is in some ways more rewarding than people just saying they like us because we remind them of The Fall. We had a really bad review from that free paper ‘Loud and Quiet,’ who said we were ‘disgustingly woeful’ or something along those lines, which can only really be taken as a compliment, when you see what sort of music they do like. So we are unloved, as you put it, its not always a bad thing. if we had a good review in the NME or something it would probably be quite pleasing for a while, but I think we’d soon become quite depressed about it, and try to work out why this terrible paper thought we were good.”
John Lennon said, "You have to be a bastard to make it". Do you believe good guys come second?
“John was a businessman I suppose, a businessman in a beret. Or a bastard in a beret, to use his words. I find it quite hard to respect someone who says something like that, I suppose he thought he was being self-aware. I enjoy reading about Paul McCartney more, in that he is blissfully unaware of what people think of him – he’s surrounded by all these people telling him how credible he still is. I read an interview with McCartney recently, and he was boasting to the interviewer that Bono likes Wings. Whereas Lennon was saying that how much Che Guevara liked his song ‘Woman’. They were, or are, the biggest band in the world, and they still try to get the approval of people like Bono and Madonna! They were both weird – the only Beatles I like is Harrison, and the drummer, Ringo Starr. He is much better than Keith Moon, who was always falling over and being an idiot.
Anyway, in answer to the question, its not so much being a bastard, as being quite single-minded, having meetings about outfits and things. That’s what bands in London do – they decide what image to go for, which ‘era’ of music they are going to lampoon, and ride into the sunset with a contract for some horrible label. I actually have a theory about this sort of mentality, as its not just restricted to music, its in every walk of life. I was thinking about how perverse it was that at my school, in the nineties, they had started teaching Marketing, as a lesson alongside English and Maths. Its incredible now – teaching Marketing to children! I don’t seem to remember anyone batting an eyelid at the time, and now I think you can definitely see the impact of that on our culture – the way people talk and think in terms of brands – right down to creating a brand of themselves.” 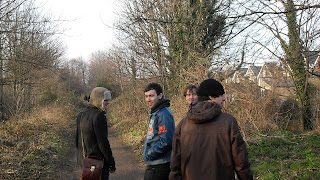 Has the line-up of your band changed much over the years?
“It’s the same group of bastards since the beginning, although for the next record our friend Dan is playing viola. Rachael also plays live with us sometimes when Alex is at the track. Because we don’t believe in practising or having meetings and things, we are able to exist quite easily, and for this reason nobody leaves the band.”
Do you see the audience as your parents  and do you want their approval?
“Yeah, although I don’t remember my parents ever wearing this much denim. I went to one gig with my dad to see a hardcore band – and the support bands all sounded very seventies, they had these long-winded instrumental passages like Steve Winwood. So I think he found it a bit disorientating as it was like when he last went to see gigs! I felt awful, I felt like I had to keep apologising at what we were enduring. He enjoyed the hardcore band though at least. Because my folks were into punk when it was happening, I didn’t have that phase of getting into Pearl Jam and things at school, as a rebellion device, thankfully. I just listened to Jimmy Nail, the country singer, he was my favourite. Everyone knew him for this pop song called ‘Ain’t No Doubt,’ which was also pretty good in a sort of yuppies-night-out type way, but the best stuff was his country things, like Cowboy Dreams. “Gonna make you happy it's easier than it seems, I'm gonna ambush you at sundown, I’m gonna give you cowboy dreams.. Cowboy dreams, gonna give you cowboy dreams.” He was the man – much better than Nirvana and Pearl Jam.”


What from your school or college days do you feel most bitter about?
“Just the general degrading treatment I suppose. I’m not bitter about school so much, it’s just a microcosm of this world we live in I suppose. I have a lot of sympathy with teachers as I know how weird children can behave, having been one myself.”
Do you like to be beside the sea side? Where do you go to relax or take stock?
“The rest of the band, apart from Christian live in Brighton, that’s where the band formed. I lived in Brighton for a while, or Hove I suppose, technically, for about four years. The best place I had was this real dump of a bedsit in a normal sized house, right by the sea. I could hear everything the guy next to me did, and vice versa I imagine – he was a dustman who stank the place out with his cigars! I loved it in a way, although I had no door bell and no phone at the time, and didn’t really go out and meet girls or anything as I didn’t know anyone. The shower was in this sort of makeshift closet, where the paint peeled off and blocked the plug, and the toilet was so small, that you couldn’t sit on the toilet and close the door at the same time – your knees would block it! It was really expensive though – I couldn’t afford it in the end so had to leave, but have some nice memories. Walking down to the seafront after dinner. I was quite self-sufficient at the time. I didn’t really like going into the centre of Brighton as it was a bit ridiculous – all of these heroin addicts charging around demanding money for the phone box. I made some really good friends there though, obviously. Nowadays I live quite close to the countryside with my wife, so I can go for walks and things quite easily, which I really enjoy.”
What is your band's most recent track or work in progress?
“We are doing a whole new record, which is very satisfying as our first album was recorded over a really long period, the odd song here and there. This one is more conceptual, not in a Rick Wakeman way, but just more focused. It is going to be called ‘Darby Joan and Fosters.’”
Posted by The Rebel Magazine at 02:46